One of the distinct joys of being a fine art appraiser and cataloguer is getting to physically handle a work and bring its forgotten history to light. When we are lucky, the owner provides documentation for provenance or context. More often than not, what we work with are anecdotes that we must verify or rule out independently. At the heart of cataloguing is looking at a work objectively and asking the fundamental question “What does that mean?” of any inscriptions or marks.

Recently, I had the pleasure of puzzling over a winter scene by Walter Launt Palmer.  Palmer was acclaimed in his lifetime for his winter scenes and it’s easy to see why—he essentially did for snow what Monet did for haystacks, which is to say that he represented snow with a depth of color and texture that no other American artist had previously. As far as art historical categories go, Palmer is considered a Tonalist more than an Impressionist, owing in large part to his muted palette and stylistic restraint.

In cataloguing, examination of the reverse of a work is de rigueur. What we hope to find are titles, dedications, labels and other bits of information to tell us about its former life. In the case of our Palmer, we found a promising lead—an effaced title and stamp (see Figure 1).  After a process of trial and error, we explored the possibility that the 1917 volume of the American Art Annual—a venerable publication in print from 1898 to 1948—might have further information for us.  To my surprise, under the heading “Paintings Sold at Auction: Season of 1916-1917” was an entry for a Walter Launt Palmer work entitled “The Pine Grove,” 30 x 22 inches, sold as lot 154 in a sale entitled “War Relief” to Otto Bernet. The consignor believed that her father had purchased the work at auction in New York, and ours measured exactly 30 x 22 inches. Could this be our work? More information was needed. What was this “War Relief” sale, and more importantly, was a catalogue produced? 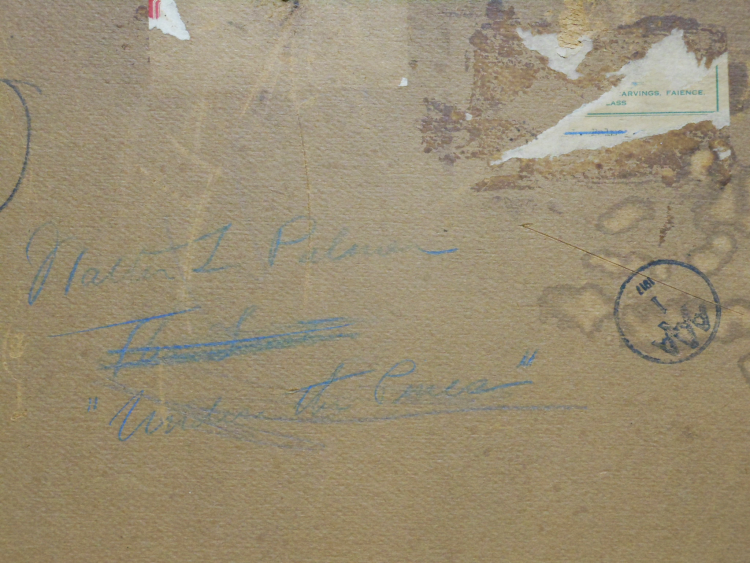 Further research turned up the following:

• The “War Relief” sale was held May 3 to 4, 1917, and comprised of works donated by the American Artists’ Committee of One Hundred, of which Palmer was a member (1)

• Most members of this artist Committee had trained or exhibited in France, and this American relief alliance formed in 1916 out of gratitude and concern for their French mentors and counterparts (2)

• The sale was handled by the American Art Association (our AAA acronym!), an auctioneer established in 1883 (3) 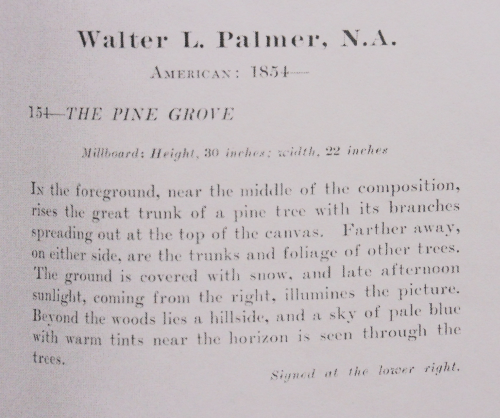 Sometimes tracking down primary source material is as tricky as finding out that it exists in the first place. There were less than three copies of the sale catalogue in public collections nationally, and the only book form was located in the Brooklyn Museum library. With the help of a library assistant, we found that the catalogue description matched our work (see fig. 2).

There is still more to know about this work, such as whether or not the previous owner, Collier Whittemore Baird (1888-1977), an executive in the rubber industry, acquired it directly from Otto Bernet or through an intermediary. The American Art Association Records, microfilmed through the Smithsonian Archives of American Art (SAAM), may yield further clues.

Larger contextual questions also remain, such as what was Palmer’s involvement with the war relief committee and how many other sales did he participate in? The American Artists’ Committee of One Hundred Records, also through the SAAM, may be revealing.

As cataloguers, we are the temporary custodians of these works, and consider ourselves lucky when we’ve found enough to pique the interest of the next owner—ideally, a devoted researcher.

This work will find a new home at the February 3, 2012 American & European Works of Art auction in Boston.