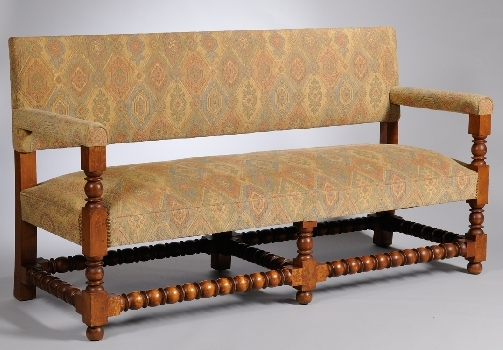 Good quality, strong design and well-regarded manufacturers are all important factors to look for when purchasing reproduction furniture. As I discussed in a 2011 blog post, The Case for Reproductions: Affordable American Antique Furniture, reproductions can be an affordable entry point to antiques auctions and may also result in the retention of value and even growth potential over time.

Wallace Nutting (1861-1941) is perhaps the most recognizable name of the manufacturers discussed in my previous post. Before starting his furniture manufacturing business, he made hand-colored photographs, and is perhaps best known for this work. He produced millions of photographs including Colonial-themed interior views, bucolic landscapes, gardens, foreign locales, still life arrangements, people, and other more unusual subjects that fall outside of these earlier examples. 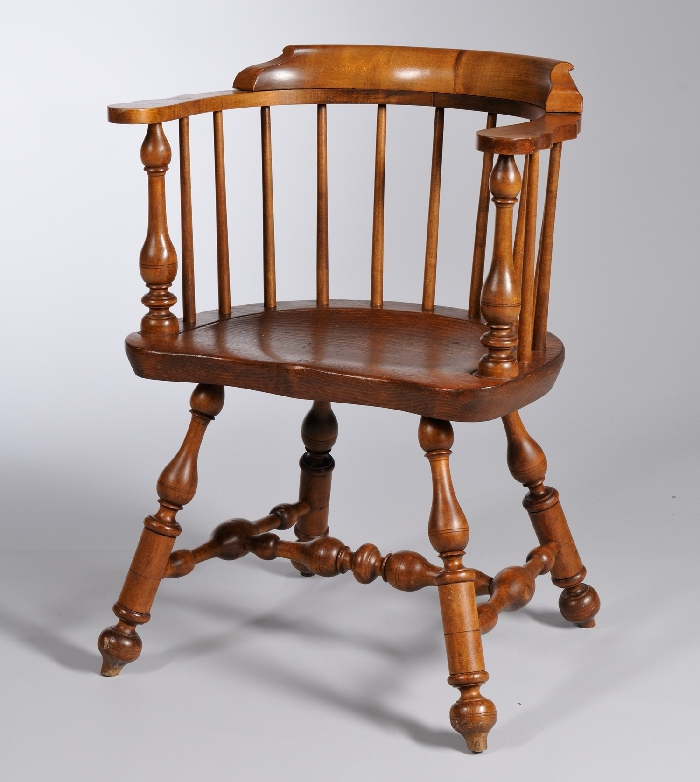 Nutting’s path to creating furniture started with a collection. In the late 1910s, he assembled an encyclopedic collection of antique furniture to serve as design prototypes for his furniture manufacturing business and to be used as visual “props” in the photographs he produced.  He also published reference books on antique furniture. His own wonderful collection of hundreds of objects of early American furniture, decorative arts, and objects of material culture were purchased by the Wadsworth Atheneaum in Hartford, CT with funds from the financier (and collector) J.P. Morgan. The collection is well worth a visit.

Even in the early part of the 20th century, Nutting realized that the finest examples of Pilgrim century furniture were becoming less attainable and less affordable. His solution was to collect examples to preserve them, and to devote himself to fashioning faithful copies through his company based in Framingham, MA. Nutting’s goal in manufacturing reproduction furniture was to “produce the best forms, put together in the finest manner.” and to “make correct pieces of their period available.”

Common Then is Common Now

Wallace Nutting designed and sold more chairs than any other form of furniture produced during the span of the firm’s business from 1918-1941. Of the over 100 styles in production, Windsor chairs were the most common at the time and were produced over the longest period of time. So it stands to reason that these are seen most frequently in the marketplace today.

Some Windsor chairs are more scarce than others, but still more common than other Wallace Nutting reproductions. Unless they are unusually elaborate or contain carved elements, most examples of Windsor side chairs and armchairs can be found for less than $500. 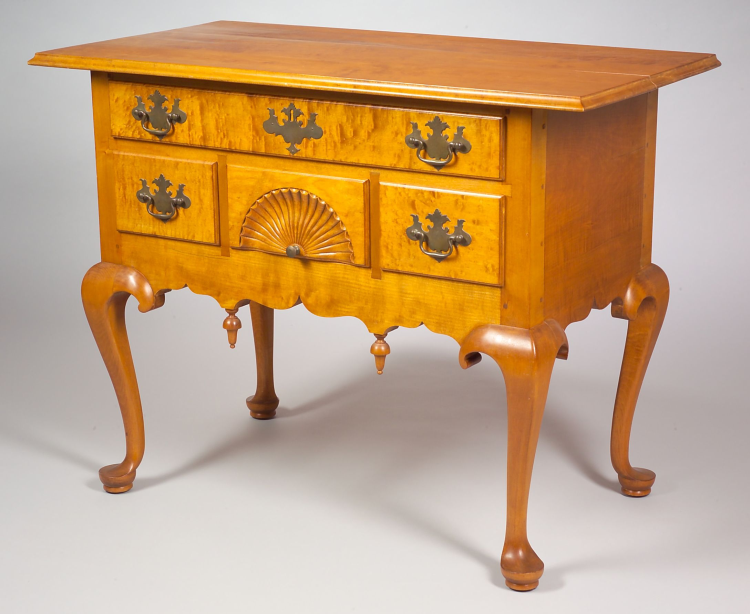 “Tables” were the second-most common form that Nutting produced, and are more sought-after than chairs, though they can occasionally be found in the $500 range. While sideboards and lowboys were categorized by Wallace Nutting as tables, we think of them today as case furniture. A great example of a Queen Anne style carved bird’s eye maple lowboy, no. 691 was priced at $180 in 1932. Auctioned at Skinner in 2006, it fetched $4,266 including buyers’ premium. Larger and more elaborate pieces were produced in smaller quantities and cost more when they were first made. Therefore, these pieces are rarer and more valuable today. Case furniture typically sells for $1,000 and up. A Goddard-Townsend style blockfront mahogany Chippendale secretary auctioned in 2002 achieved the record price of $36,750.

While condition always matters, buyers are more likely to be forgiving with a piece that is hundreds of years old, but less so for the same issues on a more recent piece. Look for furniture with an original, unblemished surface, mild wear consistent with use, no breaks, splits or cracks, and all of its elements intact. One of the best resources? Copies of Nutting’s catalogs from the 1930s are readily available in the original and reprints. Pictures, descriptives, models, and prices will help you place a piece of reproduction furniture into context.

In his 1930 Supreme Edition catalogue, Wallace Nutting boasts under a header entitled “The Antiques of the Future” that, “My furniture, when homes have broken up, is never sold as second hand…Wide-awake persons now know that my name branded on furniture means style and quality.” He was correct.  I’ve found that in the current marketplace, faithful reproductions of period pieces typically meet far greater success than hodge-podges and pastiches. Wallace Nutting’s legacy is his reverence for Pilgrim and Colonial period furnishing and his desire to make faithful reproductions available to the masses.

7 thoughts on “A Guide to Wallace Nutting Furniture”