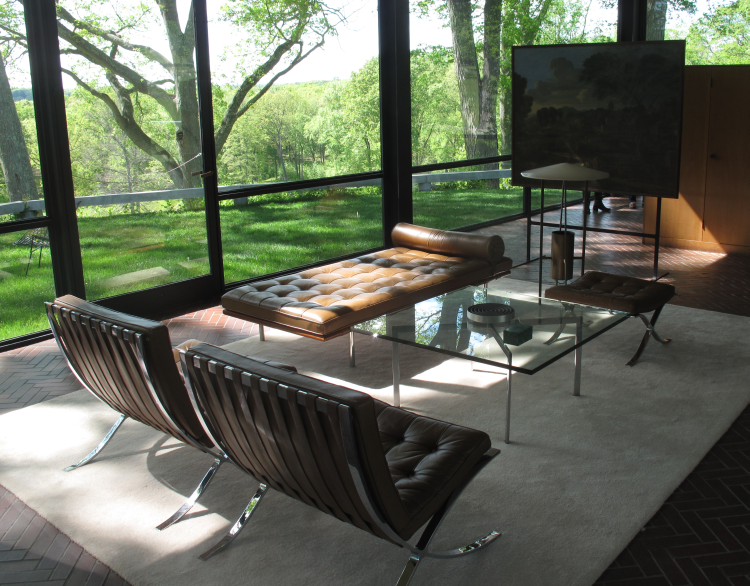 Visiting Eliot Noyes’ home and the Philip Johnson Glass House last week brought to mind the saying, “the whole is greater than the sum of its parts.” In each mid-century modern home, seeing the architecture, landscape, and objects all together stimulated my imagination and interested me far more than if I’d been presented each vase and table and painting separately in a museum.

I love to see objects in situ. Seeing the original context helps you understand how people lived with these objects and how they used them. In addition, the environment often adds new meaning to the object. In the Glass House, the horizon line of the painting Johnson selected to place in his living room area, Burial of Phocion by Nicolas Poussin (1594-1665), lines up with the real horizon line outside the clear glass walls of the home. 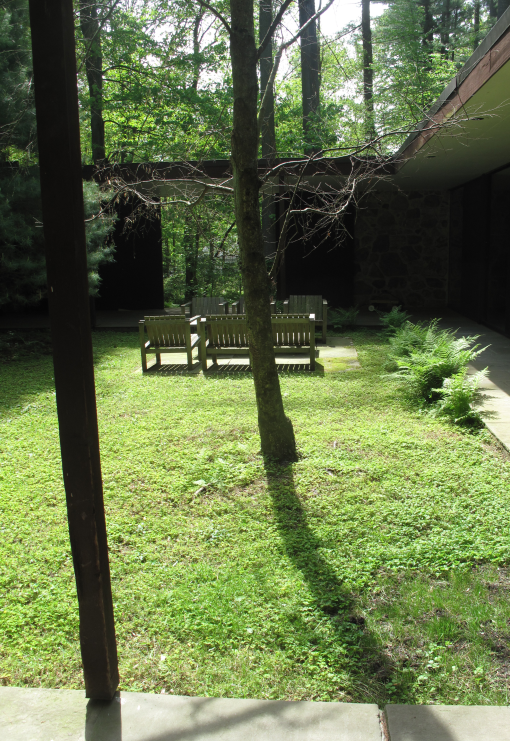 A view through the courtyard at the Noyes House

Just as nature expands the meaning of the objects, so do the objects create new meaning for the surrounding environment. Fred Noyes grew up living in a mid-century modern courtyard home in New Canaan, Connecticut designed by his father, Eliot Noyes, a friend and colleague of Philip Johnson.

Fred Noyes explained that art was not just present in his home; it was a part of his lifestyle. “It’s not like the architecture is a place where you show art, the architecture and art are the same thing, they’re just different scales,” he said. “And that includes the landscape. The sense of the rock as a piece of art, as a piece of nature, as a piece of the house, completely coalesces.”

On a more practical note, the design of the house forced those living there to get outside – the bedrooms and bathrooms were physically separated from the kitchen and living area by a courtyard and walkway. In the middle of the winter, the only way to go to the bathroom was to walk outside!

Because of this intimate relationship between nature, art, and architecture, the Noyes house can actually disappear into the landscape. Fred Noyes explains that people often come looking for his home, and drive by without even seeing it. From the road, all you can see is a stone wall that’s like every other stone wall in New England. 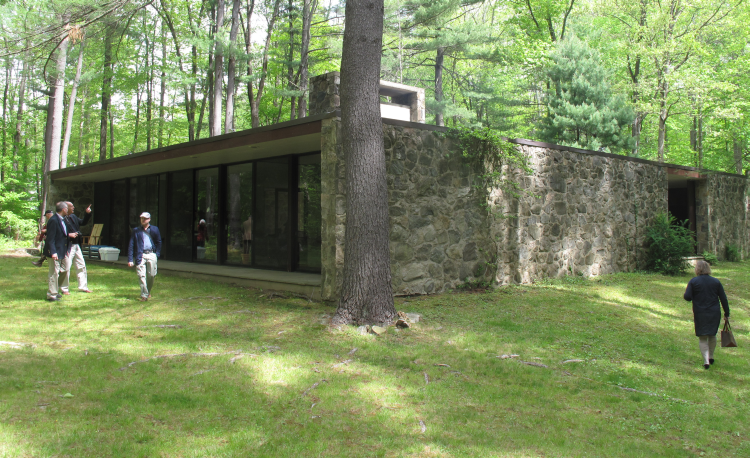 While Noyes used stone and glass together in one building, Johnson separated the two materials. He placed a brick house diagonally to the glass house, and then a circular pool on the third point of a triangle. A rectangular platform beside the pool echoes the rectangular form of the two buildings, and the circle of the pool is reflected in the circular enclosed bathroom in the Glass House and the circular windows of the brick house.

Both architects demonstrated a clear and profound understanding of geometry and composition. It would be impossible to take away any of the buildings or architectural elements without losing the sense of cohesion and balance of the whole environment. 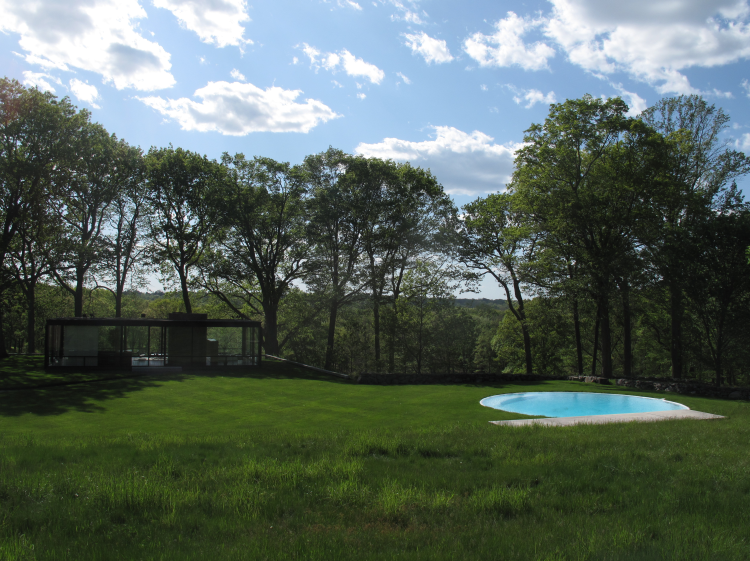 A view of the Philip Johnson Glass House and pool

Preserving sites like the Glass House for educational purposes is a must, and the National Trust for Historic Preservation is to be commended for keeping the objects, art, and environment exactly how Philip Johnson intended them to be seen.

It is my hope as well as Fred Noyes’ that his home should be preserved and open to the public as is the Glass House.

We’d like to thank the Boston Architectural College for organizing the tour and inviting us to come along. Read my post about our visit to the Glass House here.

This post was co-authored by Jane Prentiss, Director of 20th Century Design, and Kathryn Gargolinski, Web Marketing Specialist at Skinner, Inc. after a visit to the Glass House and Philip Noyes residence on a tour organized by the Boston Architectural College.

3 thoughts on “Art, Architecture, and Environment: Envisioning the Whole”