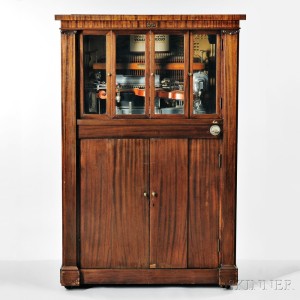 The Violano-Virtuoso was invented by Henry Konrad Sandell, a contemporary of Thomas Edison, who arrived in Chicago via Sweden in 1888 at the age of twelve. In March 1905 Mr. Sandell applied for his patent for an electric self-playing violin. It was granted in December of 1905 and assigned to the Mills Novelty Company. The first instrument produced, the Automatic Virtuosa, only contained the violin. During that time, coin-operated player pianos were very popular so it didn’t take long for the Mills Novelty Company to realize that the violin by itself was not going to be marketable enough.  Most of the Automatic Virtuosa violins were sent back to the factory to be retrofitted with a piano.

When the Mills Novelty Company set out to produce this instrument they faced the task of finding a “true” violin that could be played for hours on end without losing its sound quality or tone. They tested over two hundred violins by prominent makers of the day but after many failed findings the company set out to produce violins in their own factories to suit the particular needs of a self-playing violin,  which included correct principles as to height of the arch, placing of sound post and “extra thick” backs.

The Violano-Virtuoso was first displayed at the Alas-Yukon-Pacific Exposition in Seattle, Washington in 1909 but didn’t become available to the public in quantity until around 1911. They were usually coin-operated machines that were placed in public places such as ice cream parlors, billiard halls, restaurants, dance halls, theaters, confectioners, and the like. 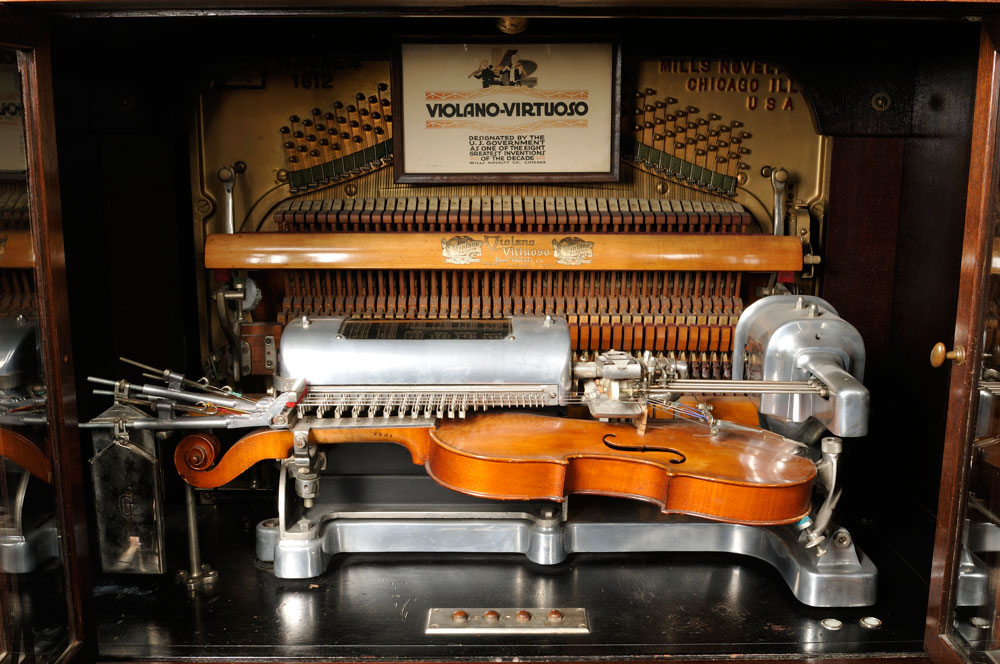 The United States patent office designated the Violano-Virtuoso “one of the eight great scientific instruments of the decade” and all the instruments proudly displayed that information with a printed paper label attached above the piano board that was easily viewed through accordion-hinged glass doors. These instruments, unlike others of the time period, operate the violin and piano by electric motors or magnets and not pneumatically (compressed air).  When the starting lever is tripped either manually or by a coin it starts the perforated music roll, which usually carried five songs, while the roll revolves a metal brush passes over the paper making electrical connections through the perforations. The piano portion of the instrument is played by regular hammers using the standard player piano movement of forty-four notes, half the number of keys found on a normal piano board. And with the distinctive layout of the strings having the bass strings at the center of the frame and the treble strings extending out from the center it gives a unique but classic sound. Some say the instrument is a marvel of simplicity both in construction and operation. 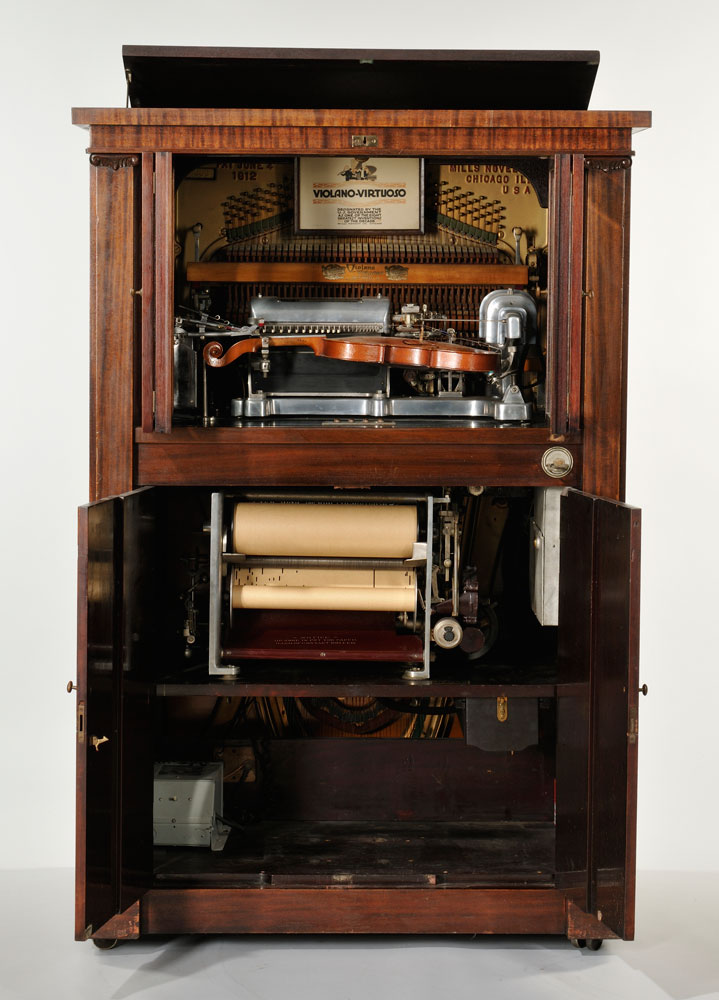 Production of the Violano-Virtuoso ended in the 1930’s and made way for the new era of coin-operated instruments or machines. There is no record on the exact number of these instruments whether they were the “Concert Grand,” “Baby Grand” like Lot 280 in our Friday, April 29th, Clocks, Watches & Scientific Instruments auction or the “De Luxe Model” (also known as “Double Mills”) featuring dual violins. The Mills Novelty Company, Incorporated of Chicago, Illinois was once a leading manufacturer of coin operated machines, including slot machines, vending machines, and jukeboxes, in the United States. The company is still in existence today and focuses on restoring Mills Violano instruments and manufacturing a computer based digital system for the antique Mills Violano-Virtuoso instruments.

See the Violano-Virtuoso in person at Skinner’s Marlborough Gallery during auction preview hours, Wednesday, April 27 from 12-7PM, Thursday, April 28 from 12-7PM or before the auction on Friday, April 29 from 8AM-9:30AM.