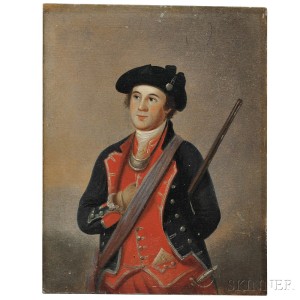 Few Presidents have inspired more art and commemorative memorabilia than George Washington and Abraham Lincoln, and objects that can be directly linked to either man are highly prized.  Skinner kicks off its March American Furniture & Decorative Arts auction with several important lots celebrating these and other past American Presidents.

A small oil on copper portrait of George Washington is featured in Lot 4 (Estimate $4,000-$6,000).  Painted in the late 18 century after Charles Willson Peale’s famous 1772 portrait of Washington as Colonel of the First Virginia Regiment, this miniature portrait depicts a young Washington who gained his formative military experience during the French & Indian War. In this version, as in the original Peale painting, Washington is seen wearing his Virginia provincial uniform of 1760-62, rendered in minute and exacting detail including the lace on his uniform, a shirt buckle worn above the gorget and the “Order of March” note peeking out of his waistcoat pocket.  However, unlike Peale’s original, the background is simplified to a softened palette of light colors that focus the viewer’s attention fully on Colonel Washington. 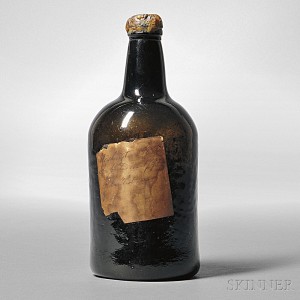 An 18thcentury wine bottle associated with George Washington is presented in Lot 5 (Estimate $10,000-$15,000).  This unique bottle bears a handwritten paper label inscribed “Washington Wine/Imported in 1792/Rebottled 1840.”  It descended through the family of Major Abraham Kirkpatrick, an American officer and acquaintance of Washington during the Whiskey Rebellion.  The Whiskey Rebellion occurred during President Washington’s second term in office following the enactment of a law taxing American-produced distilled spirits.Intended to generate revenue to reduce the national debt,the tax was especially controversial in western Pennsylvania,and many of that region’s citizens responded by harassing government-appointed tax collectors.  One of these tax collectors was General John Neville, a veteran of the Revolution and a friend of George Washington. On July 16, 1794, General Neville was attacked at his home by a band of rebellious citizens who refused to pay the tax. In response, Major Kirkpatrick was summoned from the local garrison and managed to rescue General Neville. It is believed that President George Washington presented Major Abraham Kirkpatrick several bottles of wine in gratitude for his rescue of General John Neville, of which this bottle is the only known survivor. The bottle remained in the Kirkpartrick family for over 200 years until it was acquired by the consignor approximately fifteen years ago. 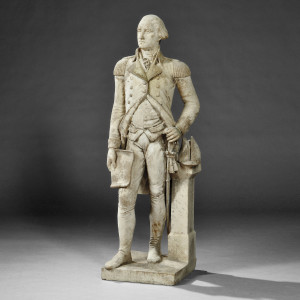 George Washington is also featured in a full-length marble statue in Lot 3 (Estimate $15,000-$25,000).  Dressed in a 19th century interpretation of Washington’s Revolutionary War military uniform and holding a document at his right side, the figure is reminiscent of John Trumbull’s portrayals of General Washington in his early 19th century monumental historical paintings. 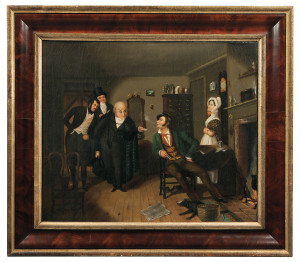 Turning toward politics, a captivating image of “Barnburner Politicking” in the 1844 Presidential election is represented in Lot 11 (Estimate $30,000-$50,000).A man thought to be ex-President Martin Van Buren is depicted offering a printed card supporting the Polk/Dallas campaign to a skeptical-looking man and wife in their home.  Apart from being a fascinating and intimate view of mid-19 century political campaigning, the painting’s carefully rendered interior details offer an interesting view of the furnishings and décor of a middle-class 1840s home. 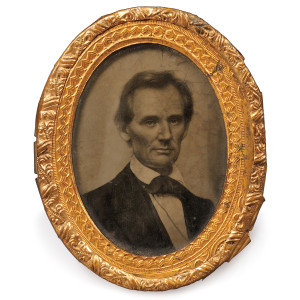 The dawn of photography as a tool in Presidential campaigns is illustrated in Lot 12 (Estimate $4,000-$6,000), which features Abraham Lincoln in an ambrotype campaign button manufactured by Boston “Ambrotype Artist” George Clark, Jr.  This pin-back button was intended to be worn by Lincoln supporters and played an important role in presenting a flattering image of Lincoln to the public in an era when mass production of photographs was in its infancy.  The 1860 election, for which this button was made, is regarded as the first Presidential election to use photography as a means of showing potential voters what their candidates actually looked like.

To learn more about these and other historical lots in the American Furniture & Decorative Arts auction visit www.skinnerinc.com/auctions/2786B/lots.