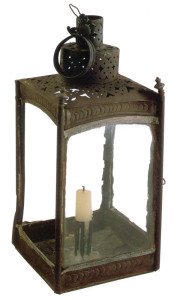 Lantern, Boston, about 1775. Courtesy of the Concord Museum

When Ralph Waldo Emerson wrote this famous stanza, he was referring specifically to events that occurred at Concord’s North Bridge on April 19, 1775. However, the phrase “the shot heard round the world” also represents the entire American Revolution and its aftermath. In a new exhibition at the Concord Museum, titled “The Shot Heard Round the World: April 19, 1775,” we are similarly broadening the application of his words. In a meaningful sense, that entire day in history is “the shot heard round the world.”

Literate observers in Boston in the 1760s and 70s had no difficulty tracing their political woes as far back as the Magna Charta. Literate observers today likewise have no difficulty tracing the origins of the present United States right back to April 19, 1775. You can’t get to where we are now from the Magna Charta without going through April 19; it was the kind of day that changes history. In this exhibition we resolved to focus on the day itself; to gather meaningful objects that were there and couple them with first person accounts to consider the events of the day almost hour by hour. Over the course of reviewing the accounts of what transpired, and figuring out what parts of the narrative the objects themselves could provide, it became more and more apparent that Military Governor General Gage was right when he declared the daylong battle a preconcerted action on the part of the Provincials. 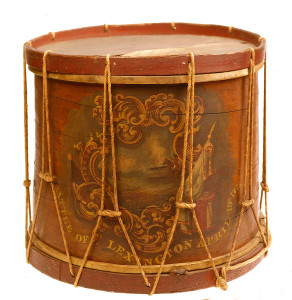 One of the first objects the visitor encounters in the exhibition is a lantern that survives with a convincing history of having been used to make the famous signal from Christ Church: “If the British went out by Water we would show two Lanthorns in the North Church Steeple, and if by Land, one, as a Signal.” Paul Revere’s draft deposition of his actions on the night of April 18 and the day of April 19 is also in the exhibit, on loan from the Massachusetts Historical Society. The light shining from that lantern that night is part of the shot heard round the world.

Another object in the exhibit is the drum used by 16-year-old William Diamond to summon Lexington’s militia to the Common, where part of the column of British Regulars split off to confront them. The British killed eight of the Lexington militia. The sound of this drum, the sound of the gunfire, and the sound of the cheer the British gave when the firing was over, are all part of the shot heard round the world.

The sword of Major John Buttrick is in the exhibit on loan from the Massachusetts Archives. Buttrick, whose home was in plain sight of the North Bridge, took command of the 450 Provincial troops gathered above the North Bridge. As minuteman Amos Barrett (his powder horn is in the exhibition) recalled vividly fifty years later, the Regulars fired three warning shots into the Concord River and followed with a volley. John Buttrick ordered his troops to fire back; all these sounds are part of the shot heard round the world.

Nor did the conflict end there – it was a very long day. The exhibit also contains objects that represent the harrowing of the Regulars by ever-increasing numbers of Provincial minutemen and militia. By the time the sun went down on April 19, 1775, the world had changed; just as the Provincials had planned.

Sword of Major John Buttrick, England, about 1770. Courtesy of the Massachusetts Archives