During the latter half of the 20th century the American public probably most associated the Shakers with well-made antique furniture. Two quotes are often invoked in association with this. Trappist monk Thomas Merton said “the peculiar grace of a Shaker chair is due to the fact that it was made by someone capable of believing that an angel might come and sit on it.” Conversely, Sister Mildred Barker of the Sabbathday Lake, Maine, Shakers lamented that non-Shakers admired Shaker material culture at the expense of the Christ-life embraced by Believers. Barker’s quote “I almost expect to be remembered as a chair or a table” nicely encapsulates this. 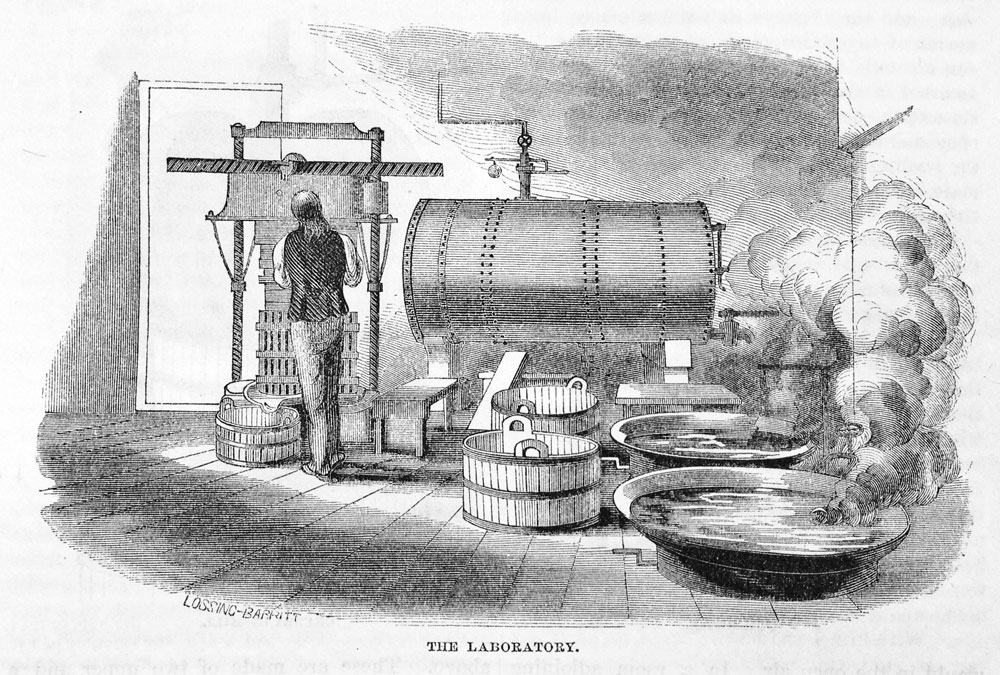 During the 19th century, however, the Shakers were probably best known for the herbal and medicinal preparations. Under the influence of Samuel Thomson, as well as Christian evangelical preacher Elias Smith, the American public moved toward the practice of “vegetable medicine.” Herbs were ingested or applied in dry form, or via fluid extracts and compounded medicines. The Shaker physicians and herbalists were known throughout the United States, and even in Europe, for their expertise in growing, drying, pressing, and extracting botanical medicines. Newspapers commonly carried advertisements from merchants selling Shaker herbs, and the name Shaker was a byword for quality. This industry was pursued on the largest scale at New Lebanon. An illustrated 1857 article by artist and journalist Benson John Lossing in Harper’s captured the industry at its height and described the process used to make extracts.

The Extract House, in which is the laboratory, for the preparation of juices for medical purposes, is a large frame building, thirty-six by one hundred feet. It was erected in 1850. It is supplied with the most perfect apparatus, and managed by James Long, a skillful chemist, and a member of the Society. In the principal room of the laboratory the chief operations of cracking, steaming, and pressing the roots and herbs are carried on, together with the boiling of the juices thus extracted. In one corner is a large boiler, into which the herbs or roots are placed and steam introduced. From this boiler the steamed herbs are conveyed to grated cylinders and subjected to immense pressure. The juices are then put in copper pans, inclosed in iron jackets, in such a manner that steam is introduced between the jackets and the pans, and the liquid boiled down to the proper consistency for use. Some juices, in order to avoid the destruction or modification of their medicinal properties, are conveyed to an upper room, and there boiled in a huge copper vacuum pan, from which, as its name implies, the air has been exhausted. This allows the liquid to boil at a much lower temperature than it would in the open air. [1]

Pioneer Shaker collectors Edward Deming Andrews and Faith Andrews preserved much of the material evidence of this industry, including thousands of colorful labels used by the Shakers for their products. Collector and scholar M. Stephen Miller was told by Faith Andrews that they “swept bundles of these labels into shopping bags at the medicine shop at New Lebanon.” 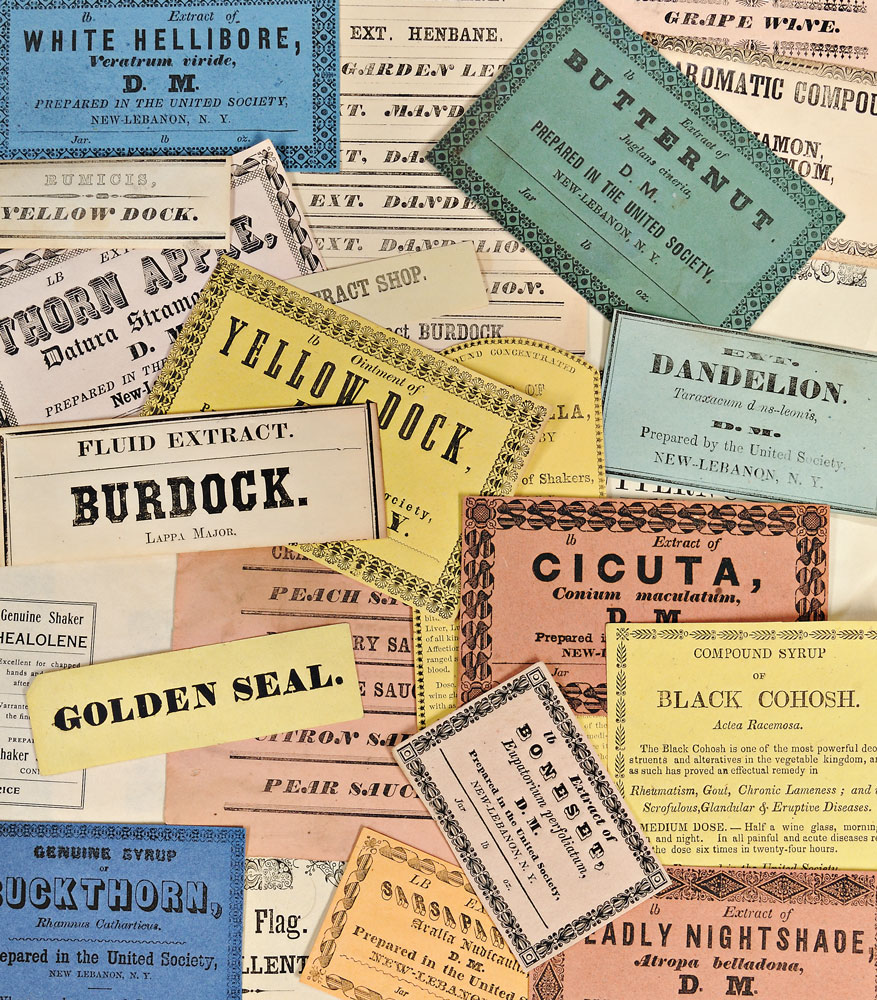 While this group of labels was found by the Andrewses at Mount Lebanon, both that community and the community at Watervliet, New York used identical labels for their herbal preparations. These labels were placed on both the bottles containing the preparations, and the cardboard cylinders used to package the bottles. The Andrewses also acquired the cupboards specially constructed to store the labels from both New Lebanon and Canterbury. The Canterbury cupboard contains pockets for sorting 216 different labels that were affixed to the wrappers of a tremendous variety of herbs, in different preparations and quantities. Both cupboards are in the collection of Hancock Shaker Village. [2]

In my previous blogpost discussing the “make-do” box constructed of Shaker medicinal broadsides I situated the Andrewses among other early ephemera collectors. The labels offered in the current auction constitute yet more evidence of their commitment to saving Shaker culture, even the most humble and ephemeral items. Luckily for those of us who prize the colorful paper and striking graphic design of these labels they have escaped their ephemeral destiny and are now treasured, ironically, as items of enduring value.