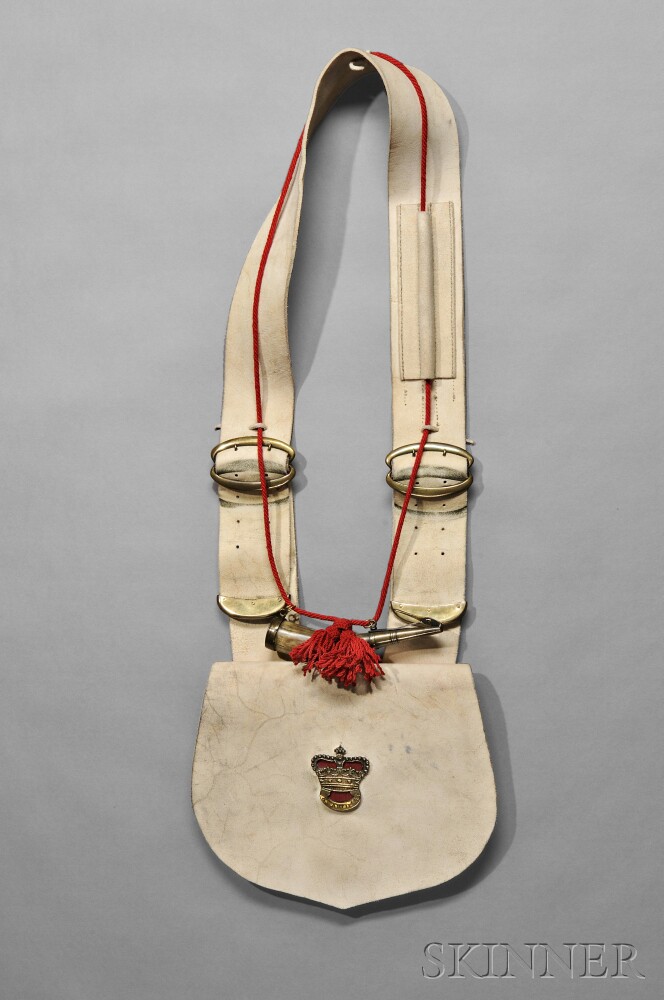 Reproduction of a Royal Artillery Pouch by Joel Bohy

You never know what you will find while doing research. In November 2010, I was at the Arlington Historical Society, studying the events of April 19th, 1775 that sparked the Revolutionary war in America. The Museum Director asked me if I was interested in seeing a British belt which had purportedly been taken on April 19th during the British retreat through West Cambridge, MA (now the city of Arlington). As soon as she opened the box, I realized it was not a belt, but a Royal Artillery cartridge pouch flap and strap, missing the leather pouch, wooden cartridge block, and brass insignia.

A Royal Artillery pouch was designed to carry 8 or 9 rounds of ammunition for a carbine. Made from white buff leather, with brass buckles, engraved brass tabs on the end of the straps, as well as a crown and scroll insignia on the flap, the pouch also carried a few tools essential to operating the guns.

I knew that there were four of these pouches from the 1770s extant. One had been donated to the  Charleston Museum in the 1950s and could also be traced back to April 19, 1775. Another appeared at the Gettysburg Antique Arms and Militaria show in 2009. There are also two examples in England, one at the National Army Museum, and another at the Royal Artillery Museum. Now I had uncovered the fifth. But where were the missing pouch, block, and brass insignia? 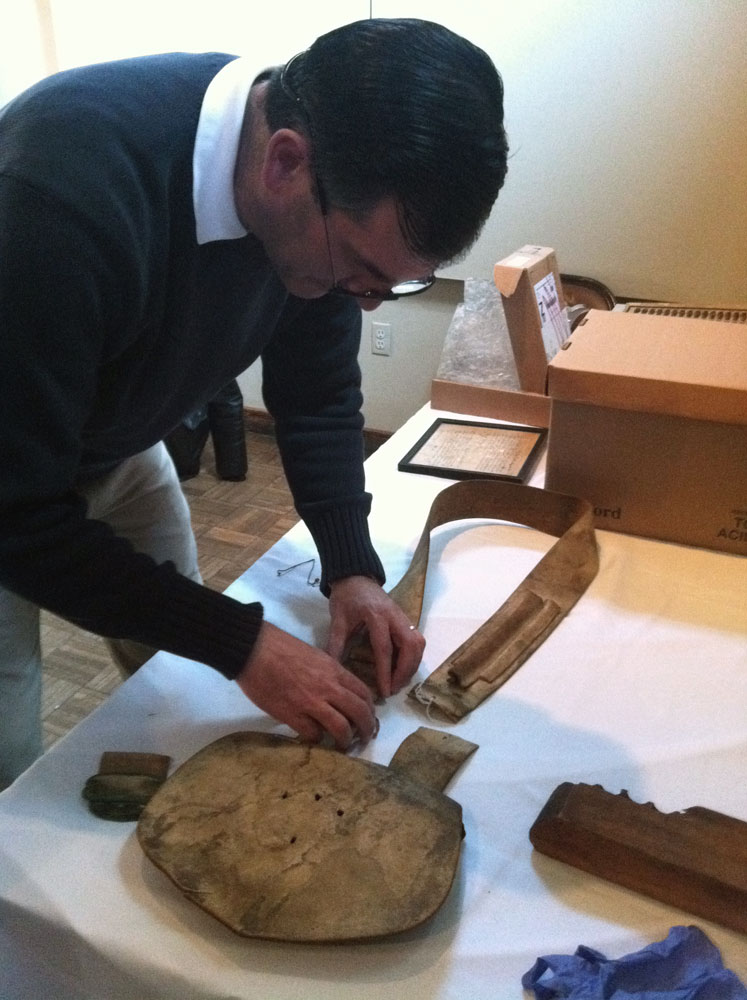 I found a clue on the back of the strap. A note written there stated that the pouch had been taken from a dead British soldier on April 19, 1775. (Records indicate that no member of the Royal Artillery unit was killed that day. A soldier may have tossed the pouch aside during the hasty retreat back to Boston.) The note also explained that in 1856, George Gray, a member of the First Congregational Church of West Cambridge, had cut the brass tabs and buckles from the pouch strap. These had been placed into a box with other objects related to the church’s history, and the box was buried during a ceremony on July 4, 1856. After more research, I learned that the church had burned in the 1970s, and a lead box filled with artifacts had been found. Did the pieces cut from the strap survive the fire?

After a few years of back and forth communications with the church, I received permission to visit and try to solve the Royal Artillery pouch puzzle. I emptied every box and file cabinet in the church’s storage area. At the very end of the day, in one of the last boxes, I found a small bubble-wrapped package. As I opened it, I could see the buckles, buff leather, and tabs that belonged to the pouch I had found two years before in a different building. The hair stood up on the back of my neck —after two years of searching and communication, the missing pieces could finally be reunited!

Looking through other boxes at the Arlington Historical Society, I also found the missing russet leather pouch, as well as a block. Instead of the usual 8 or 9 round block of a Royal Artilleryman, this one held 17 rounds. The pouch seemed to have been re-used by a thrifty Provincial soldier after its capture, and this soldier may have added the larger block.

The pouch, buckles and strap end tabs will be reunited for the first time since being separated in 1856 at the exhibit Shot Heard Round The World, April 19th, 1775 at the Concord Museum, opening on April 18th. I hope to see you there.

10 thoughts on “The Puzzle of the Royal Artillery Pouch: A Relic of the Revolutionary War”