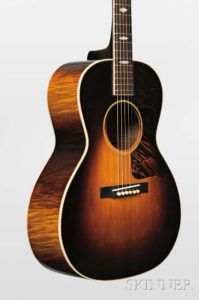 Nick Lucas was born in 1897 in Newark, New Jersey, and his Nick Lucas Special Guitar was born in the mid-1920s in Kalamazoo, Michigan (although Gibson did not make the guitar available to the public until 1927). “The Crooning Troubador,” Nick Lucas was a star of stage and screen throughout the Twenties and Thirties, and the Nick Lucas Special, a small-but-deep-bodied steel-string acoustic guitar, his musical counterpart. Both were significant in their own rights, but within the historical context of the storied Gibson company, the guitar was Gibson’s first signature model (25 years before the Les Paul), and the man its first endorsee.

Though short-lived, the Nick Lucas Special was an experiment in change – changing body shapes, changing neck joints, changing materials – right up until Gibson shipped the last unit in 1941. This final iteration, beginning with the 1934 model year, proved to be the culmination of a decade’s worth of tinkering. It’s maple body and 14-fret neck joint lent the instrument a volume and clarity that belied its diminutive size. Powerful, understated, and all class, like the man who named it. 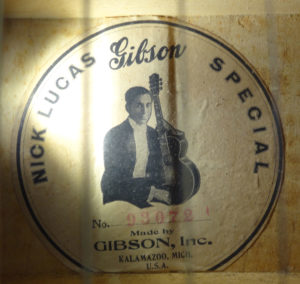