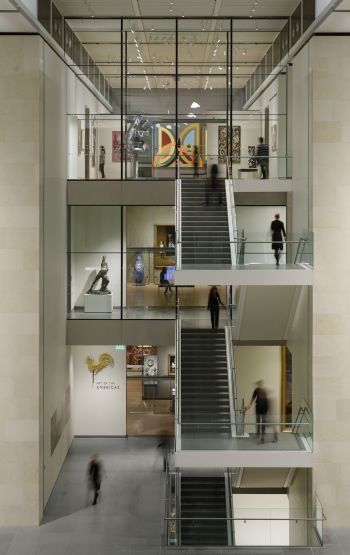 I was privileged to attend the November 13th opening gala for MFA’s new wing. The party itself was quite a blowout, with complimentary libations, exotic bite-sized dinner servings, and a very good dance band.  However, the ever-increasing volume of said band, which seemed intent by the end of the evening on blowing out a few of the glass panels which surround the Shapiro Family Courtyard, drove me to tour the very well soundproofed gallery spaces not once but twice.

The overall effect is stunning. Clearly, no expense has been spared, and everything about the galleries themselves reflects that fact in an understated way. In particular, the colors and textures of the wall coverings accomplish their objective – to highlight the objects displayed without overpowering them. Only a deliberate inspection reveals that in places the they are themselves quite sumptuous – subtly patterned fabrics rather than simple paint.

Old friends have been treated well. Watson and the Shark, Daughters of Edward Darley Boit and other icons remembered from early visits when I was being dragged to the Museum by my parents to experience “culture” have been given pride of place, in a successful effort to connect the new structure with the traditions of the MFA. The grouping of 19th century American paintings in a salon-like setting on the second floor is another throwback which works very well. 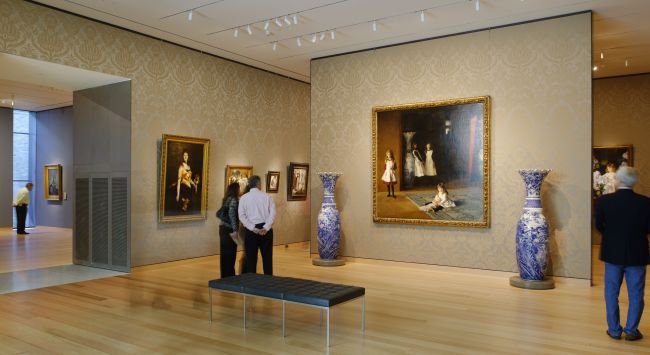 The Lower Ground level galleries had a different feel. Ancient mesoamerican pottery leads into 19th century baskets and even 20th century Native American paintings. While I was surprised that the latter materials weren’t displayed upstairs, juxtaposed with other objects of their period, their presence together did provide a sense of continuity. However, this sense was broken rather dramatically when I stepped from the rooms of Native American art to the 17th century. That is precisely the effect that the arrival of Europeans had on indigenous North American culture, which is a thoughtful touch.

These Lower level galleries also experienced much less traffic during my visit, which I attribute to the enticements of the Level 1 space, directly ahead as one exits the courtyard, and to the fact that a 180-degree turn is required to descend the staircase to the Lower Ground. Some form of encouragement to “begin at the beginning” would be helpful.

Leaping to Level 3, I was very pleasantly surprised to find on display among the fabulous works of art an assortment of eminently attainable 20th century designs – among them Eames chairs and Russel Wright and Fiesta Ware ceramics. It gave me a warm feeling to recognize these items and know that I had some of the same things at home. However, I’m hoping that we’ll soon see more world-class objects included in the 20th Century design collection. I’d seen the epitome of 19th century design in the form of a Herter Brothers cabinet, and I would love to see an analogous 20th century piece such as the Jazz bowl by Viktor Schrekengost.

I plan to visit again soon to spend more time exploring this amazing place and its treasures, and I encourage anyone who hasn’t already seen the new wing to go and visit! I look forward to hearing your reactions.

3 thoughts on “The MFA Art of the Americas Wing: Half a Billion Dollars Well Spent”