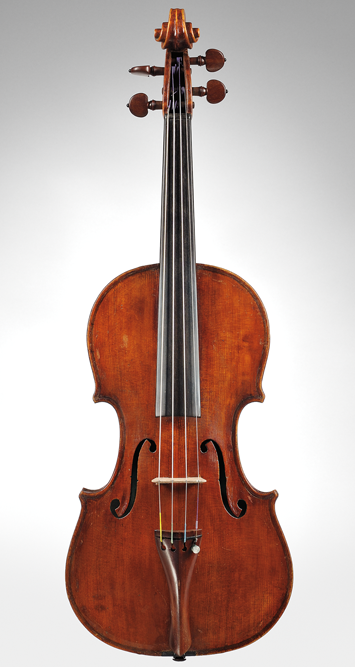 The period in Mantua following Balestrieri was comparatively quiet, with the only maker of note being Giuseppe dall’ Aglio, who worked in the style of Camilli until 1840. In 1886, Stefano Scarampella arrived in Mantua from nearby Brescia and established himself as a full-time maker two years later. His father had been an amateur builder, and his brother Giuseppe was trained in Nice and Florence. When Giuseppe died in 1902, Stefano inherited his tools and plunged himself a period of artistic isolation and intense creativity.

He favored the models of his forebears, dall’ Aglio and Balestrieri, and his wood carving is often very rugged and spontaneous, if not always so precise. Scarampella violins, violas, and cellos can even be quite rough, but the tops and backs of his instruments always feature a consistently full, flat arch that extends almost to the very edge. The sound holes are long and thin. This combination gives his instruments a very dark tone that players love.

Over this he laid a very thin but intense fiery red varnish. His instruments became extremely popular and he was possibly the only maker in Italy whose work was actually copied and even faked during his lifetime. In 1919 he turned over his workshop to his excellent pupil Gaetano Gadda, who continued the tradition of the Mantua outline and the full arch to great success in a long and productive career.

However, instruments that are certified by Scarampella’s hand are the most highly valued, especially from the period of 1902-1920. This is an example from 1917, made of local Lombardy poplar with a wild, irregular figure. It was the property of Boston Symphony Violinist Vincent Mariotti (member 1922-1941) who purchased the violin from Scarampella.

3 thoughts on “The Mantua School, New and Old: Part 2”