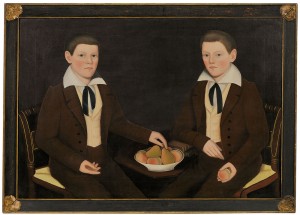 Shrouded in mystery for many years, Ammi Phillips’ portraits have been eagerly studied by scholars and avidly collected both by institutions and individuals. His work has consistently been recognized as the most important among nineteenth century American folk art portraits and has held the interest of the art world for decades.

Phillips’ output began to emerge in the early twentieth century first as the work of as many as three separate artists, A. Phillips, the Border Limner, and the Kent Limner. Through careful work from scholars over many years, Phillips’ life story and oeuvre began to emerge, and it became clear that the three artists were actually a single painter whose skill developed over a period of decades. Moving through communities and styles, Ammi Phillips was an extremely adaptable and successful portrait painter whose work continues to beguile and fascinate folk art enthusiasts today.

During his fifty year career, Phillips lived in a handful of different towns, counties, and even states, all centering around Columbia County, New York. Though he moved with greater frequency than his neighbors, he put down remarkably deep roots for a so-called itinerant artist. In fact, he seems to have made a fairly good living from his work, which was exclusively portrait painting by commission.

Observing his success, artist John Vanderlyn commended Phillips’ career to his nephew, advising him that seeking a similar career would provide a solid path toward material stability and good social standing. Vanderlyn pointed out in a letter to his nephew that country portrait painters like Phillips could “gain more money than you could by any mechanical business,” and indeed, more than Vanderlyn himself earned during periods in which the academic painter had trouble obtaining patronage for his more complex and costly works. Wherever Phillips moved, he had sufficient means to buy and sell property and was received as a solid member of each community in which he lived and worked.

Along with his willingness to undertake life in a new place, Phillips also proved highly adaptable in his work. Moving through periods of formulaic portraits and experimental compositions, the artist settled into a particularly confident and spare style by the time he painted several members of the Ten Broeck family in the early 1830s.

Many scholars have observed the confidence and control that distinguish work from Phillips’ Kent period (so named for his move to Kent, Connecticut), including his portrait of the Ten Broeck twins and a contemporaneous portrait of an unknown child in a pink dress. In contrast to his earliest portraits, which are almost dreamlike in their rendering and detail, these works display a great solidity of shape and color. There is drama in the dark backgrounds that Phillips chose, backgrounds which supplanted more elaborate settings used by his contemporaries and drew strong, immediate focus to sitters’ faces.

In the Ten Broeck twins’ portrait, the viewer’s eye runs first to the boys’ faces, framed by bright white collars that contrast starkly with the black background and the boys’ dark brown jackets. The pink of their cheeks echoes the blush of the peaches that sit in a bowl between the two boys and in one twin’s hand. A reference to the orchard in Clermont, New York, where the boys grew up, the peaches and pears that sit in a white bowl on a dark table provide a secondary point of focus that allows Phillips to negotiate the negative space between his two sitters.  That the boys are identical twins is obvious; however, the artist shows his great skill in subtly differentiating their faces. As the viewer looks from one to the other, it becomes evident that Phillips took no shortcuts in rendering his two subjects in a precise and lifelike manner. Double portraits in Phillips’ hand are very rare, and his portrait of the Ten Broeck twins distinguishes itself as one of the most memorable and stunning of his output. 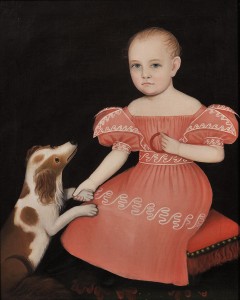 With the portrait of the young boy in a pink dress, Phillips employs a composition well-known to scholars and collectors from the so-called red dress group. During his Kent period, Phillips painted multiple portraits of children in red dresses and with pets. Most were seated on the sort of fringed footstool on which this child perches, and while others featured coral beads, this portrait includes a coral teething ring. Coral of any sort was thought to hold protective properties and was often associated with the material culture of childhood. In this case, it also confirms the relative wealth and status of the sitter’s family, as such a ring would have been expensive and rather extravagant. Beyond representing parental concern and generosity, the perfectly round coral ring here serves to center the geometry of Phillips’ composition. It anchors a right triangle formed with the boy’s eyes and the dog’s eyes, as well as an inverted triangle formed by the bodice lines of the boy’s dress and the horizontal line of his shoulders.

Phillips distills his subject here into a series of discrete shapes and fields of color, deepening from the salmon pink dress to the red footstool to the dark red pattern on the carpet and reddish-brown of the spaniel’s coat. Within this simplicity, though, Phillips includes a level of detail that is stunning. The embroidery of the dress is particularly fine and echoes textile details that Phillips includes in many of his portraits. Hints of the ingrain carpet pattern peek out from behind the spaniel’s tail and beneath the boy’s dress. In subject matter, composition, and color, this portrait stands among the finest of Ammi Phillips’ career.

It is hard to spend time looking at Ammi Phillips’ work without being mesmerized by the distinctive style and evident skill of his portraits. In these two pictures, it is not difficult to see why his work has captivated scholars and collectors for decades.

One thought on “The Folk Art Portraits of Ammi Phillips”