Guest post by Don Thomas. The collection of Don Thomas and Jorge Cao, former co-owners of Convergence Gallery in New York City, will be offered at the next Skinner Discovery auction on April 17 and 18, 2013 in Marlborough, and at the 20th Century Design auction on June 22, 2013 in Boston. 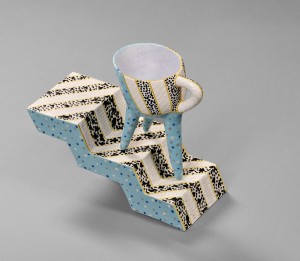 In the late 1970s, I began to recognize a profound change in the nature of the potter’s craft. Later, I would come to recognize this as the beginning of the Contemporary Crafts movement.

During this movement, makers of ceramics who had grown up under the influence of the giants of the early century — Peter Voulkos, John Mason, Rudi Autio, and others — began to reach maturity as artists themselves. Drawn to pattern and color more than the “brown pots” of an earlier time, these artists questioned every aspect of making within their media. They often chose to ignore the conventions of earlier studio potters such as Hamada, and sought inspiration in pop culture. The potter’s wheel was just one of many tools; slip casting and other commercial processes became part of the new aesthetic.

The energy of this new movement hit me at a craft fair at Rhinebeck, New York in 1977, where I had set up a booth as a jewelry vendor. I had never been to a “craft fair” before, so had no expectations. As I looked around, I saw rows of very well-made functional ware in the muted pallet of the day. But here and there, poking heads above the rest, I found weird and wonderful objects and booths full of marvels the like of which I had never seen before: teapot confections in porcelain decorated like wedding cakes; plates with narrative pictographs in bright colors; pattern and color gone wild. 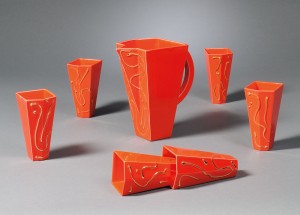 This was not what I expected! When I saw the booth of Howard Kotler, I knew I truly had stumbled behind the looking glass. He was placing religious-themed ceramic decals on commercial pottery blanks. Wow! Something was going on here! It seemed to me that I had found Duchamp at a craft fair. I was also impressed at how many of the makers, producing some of the most interesting work, were women. This was not the case in the art world in general — at least not the art world of galleries and museums. This was new and it was refreshing, and it felt right.

This revelation led to Convergence, a gallery in SoHo in New York City, which my partner, Jorge Cao, and I opened in 1980. It was a crazy and exhilarating and frustrating five years. An astounding amount of quality work passed through Convergence. Some of the makers from that time have gone on to become quite important in their fields: Jonathan Bonner, Wendy Maruyama, Bob Trotman, Danny Perkins, Warren Muller, and John DeFazio, to mention a few.

The collection of contemporary ceramics Skinner is offering at auction is a direct result of our work with these and other artists. Now, as I look over the collection, I marvel at its freshness. It speaks of its time but does not seem dated. These pieces work as well in 2013 as they did in 1980. Jorge, now my husband, and I have enjoyed this art pottery for years. Our wish is that the pieces find appreciative new homes.