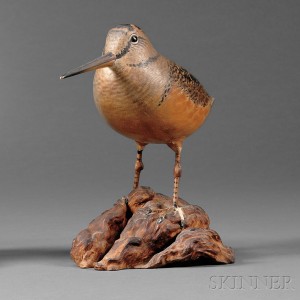 For amateur naturalists and birders, like my wife and I, one of the most appealing categories of items we sell in Skinner’s American Furniture & Decorative Arts Department is carved birds. The carvings, often painted, come in all types – from “working” decoys by master decoy carvers of the first half of the 20th century like the Ward Brothers of Crisfield, Maryland; to decorative mantle-carvings popularized by the most well-known decoy carver of all, A. Elmer Crowell of Harwich, Massachusetts. Other examples of this art form include colorfully painted folk bird carvings from the 19th century, by master carvers including Gus Wilson of Maine, and Lothrop Holmes of Massachusetts; and miniature carvings of game birds, ducks, and songbirds by countless artists and artisans from the last half of the 20th century to today.

The bird decoy market is certainly burgeoning, and individual birds have potential at the very high end to bring prices in the five, six and even low seven figures, and folk art carvings can be whimsically wonderful (especially folk art “bird trees” typically attributed to Pennsylvania). 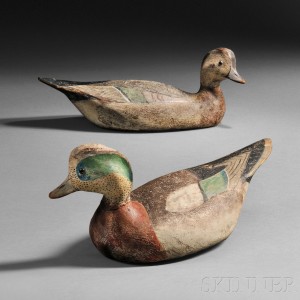 However the miniature carvings, specifically of songbirds, are what sing (pun intended) to my senses the most. They are often more affordable than their decoy or folk art counterparts, and sometimes more colorful. Certainly they are smaller and easier to stockpile a collection of! But for me, it is the accessibility and familiarity of the subjects themselves that most attract my attention.

In late April and for most of May, as New England and its inhabitants are in the last stages of emerging from the depths of winter hibernation, we experience one of my favorite times as a birder. During this 6-8 week stretch, the most colorful of our “neo-tropic migrants” begin to decorate parks, green spaces, and backyards, with dots of red, bright green, yellow, orange, and blue. These birds are on their way from Central and South America to Northern New England and the subarctic to breed. The famous group of these migrants is the wood warblers, and bird carvers have been portraying them for decades. 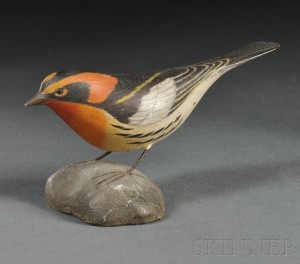 The carvers who most deftly remind me of New England’s late spring birds are my favorites, and over the time I’ve spent at Skinner, I’ve come to know New Hampshire’s Jess Blackstone as my favorite practitioner. Of course, we’re only a week or two away from the first of the Yellow-rumped Warblers, usually the hardiest of the group, and one of the first ones north. After this record-setting New England winter, they’ll be a sight for weary eyes accustomed to staring at many shades of grey.

The art work of bird carvings can act as a year-round reminder of the beauty that is to come after each long winter.

One thought on “The Art of Carved Birds”