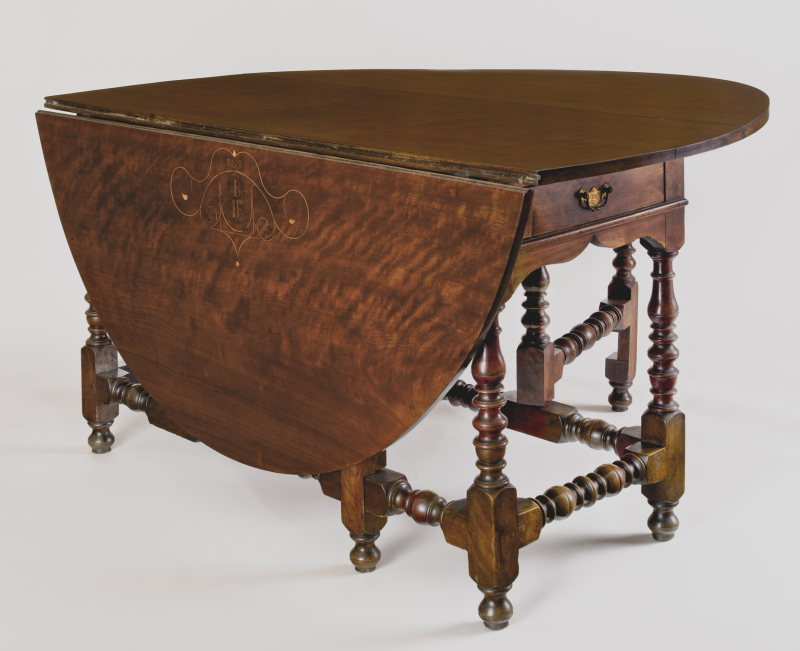 Drop-Leaf Table made for James and Elizabeth (Maris) Bartram, who married in 1725

We’d like to take you on a virtual tour of some of the rare antique furniture and other fascinating objects on display. First, you may want to read The Story Behind the Exhibit.

Skinner: What items in this exhibit do people find the most fascinating?

Wendy: I think one of the things that may surprise people is the sulfur inlay. Sulfur is a bright yellow material that melts when heated at a very low temperature. The melted sulfur was poured very carefully into carved grooves in various pieces of furniture. This manner of inlay seems to be used primarily by people of Germanic heritage, but we haven’t discovered any European precedents.

Lisa: Sulfur inlay certainly stands out as being very unusual, but we’ve also seen brass inlay, pewter inlay, and some bone inlay. It’s not all represented in the exhibition, but we know it was being done. As far as painted decoration, we see everything from more naturalistic flowers to really abstract designs. We tried to pick things in as original condition as possible to convey the shocking vibrancy of that palette.

Skinner: What would you say is the rarest object in the collection?

Wendy: One of the earliest pieces in the show is a 1725 turn-based inlaid gateleg table on the drop leaf, made just outside of Philadelphia. “JEB,” for James and Elizabeth Bartram, is inlaid on the table, along with “1725,” which was their marriage date. James Bartram was the brother of John Bartram the naturalist. This table sold for well over half a million dollars about eight years ago. It’s a pretty great rarity, and a promised gift to Winterthur.

Lisa: We also have the black unicorn painted chest that sold at Skinner in Fall 2006 for over $400,000. It’s a wonderful Berks county blanket chest with black unicorns and lions on it.

Skinner: Do you have any more commonly used objects on display as well?

Wendy: One of the things that comes to my mind that’s probably going to look the roughest, but is still a very important object, is the immigrant’s chest.

Lisa: The chest has two original labels or notes inside of it written in German script and dated 1737. They identify the chest as the property of a man named Hans Martin Amweg. He was a Mennonite who settled in Lancaster county.

Skinner: You also have a corpse tray on exhibit. What’s that?

Lisa: The corpse tray was used by the Moravians for transporting dead bodies and putting them in what they called a “corpse house” for three days to make sure the person was truly deceased before they were buried. We found it retired up in a Moravian church attic, no longer being used. So we do try to show the whole range of furniture.

Skinner: Do you ever see a range in style among objects made by the same craftsman?

Lisa: Yes. At the end of the exhibition, we compare and contrast a very plain and humble chest of drawers with a really spectacular painted kitchen cupboard. Both pieces are signed and dated by the same craftsman: Jacob Blatt. The chest is from 1828, and the cupboard is 20 years later. You would never think that the same person built them. But depending on who the client was and what he desired, craftsmen obviously made all manner of work.

Skinner: Could you tell us a little about the book you wrote to go along with the exhibition?

Wendy: The book and exhibit really go hand in hand, but the book is much more than a catalogue. It goes into great detail about the documentation and the people. For instance, we have a great sulfur inlaid tall clock with the owner’s name, Peter Ferree, and the date, 1765, inlaid across the hood. When he died, his clock was appraised in his inventory, and his estate was sold in an estate sale. His son bought the clock, evidently not having been left it in his father’s will. You find all kinds of curious things when you read inventories. 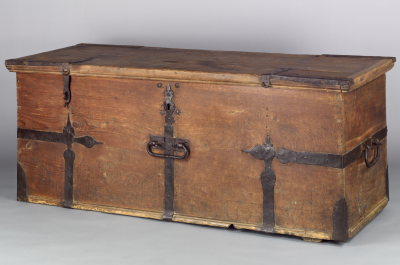 Chest used by Hans Martin Amweg and family when they immigrated in 1737.

Skinner: Very interesting! Are you hoping that this exhibit will draw people from all areas of the country?

Lisa: We hope so. I’m from Pennsylvania and have lived here my whole life, but I can say that it’s really one thing to read in a book that Pennsylvania is the most culturally diverse of the colonies, and it’s another when you see it portrayed in front of you. The varieties of paint and pattern that we show in this exhibit will take people by surprise whether they’re from the area or not. There’s so much visual variety, brilliance, and creativity going on in the region.

Skinner: Thanks Wendy and Lisa. If you’ve gone to see the exhibit, leave a comment about which objects you found most interesting, most important, or most revealing.

4 thoughts on “Take a Virtual Tour of the New Paint, Pattern and People Exhibit at Winterthur”