This article is excerpted from Sybil Andrews, by Robin S.R. Starr, the Journal of the Print World, October 2013. Read the full article. 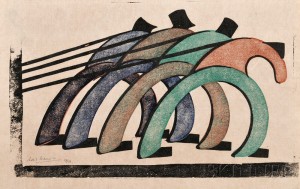 The linocuts of the Grosvenor School artists reflect the kinetic energy of the machine age imbued with the enthusiasm and optimism of the post-World War I era.

Sybil Andrews is one of the most well-known of these artists. Andrews used streamlined geometric forms and pattern in conjunction with a saturated reductive palette to create the power and excitement of motion.

The Grosvenor School’s most lasting influence was exerted through the classes of Charles Flight in the technique of linocut from 1926 to 1930. Flight declared linocut the perfect medium for the modern age. It used linoleum – an inexpensive material used primarily for flooring and first patented in 1860 – as a printing matrix. Unlike other relief printing processes, the carving of the blocks required neither great strength nor skill for success. Linoleum was soft, easy to carve, and required no specialized tools, allowing the artist to focus exclusively on compositional and expressive issues.

Like the ease of the carving process, printing was radically simplified. It did not require the use of a press. Using thin Japanese papers the blocks were easily registered. The sheet was simply laid onto an inked block and then rubbed, usually with the back of a wooden spoon. The artist could further manipulate color effects by increasing or decreasing the pressure in the rubbing, and through the thin paper, the results were immediately visible to the artist. Andrews used multiple blocks for her prints, generally limiting herself to three or four, one for each color. To create a broader palette, she would overlap colors, and added greater complexity by creating interwoven hash marks on different blocks. This resulted in more unified compositions, rather than the segmentation more common to relief prints.

Stylistically Andrews looked to the works of the Futurists and the decorative patterns of Art Deco, while maintaining an allegiance to depictions of the real – albeit contemporary – world. She used reductive geometric forms in conjunction with vivid colors to perfectly express the energy and rush of the 1920s and 1930s.

While Andrews embraced urbanism, she was equally attuned to seeing the dynamism in scenes of manual labor and rural life. Given her experience in manufacturing airplane parts, her association of labor with the modern is understandable. This is visible in Haulers of 1929. Here the figures move to the right while their ropes are attached to an immobile girder-like border at the left edge, creating palpable tension. Four men are created from curvilinear shapes of black, blue, red, and green. Each is individualized through placement of color and by the angle of his head. They are otherwise identical, each straining his rounded back and long legs to pull together as one entity, on four thick lines tied to a burden of great, obstinate weight.

This work will be offered on September 20th in the Fine Prints & Photography auction in Boston.

2 thoughts on “Sybil Andrews and the Grosvenor School Artists”