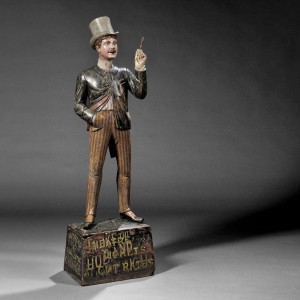 As the nation gathers in front of their televisions Sunday for the yearly spectacle that is the National Football League’s Super Bowl, some of us in the antiques business are reminded that sport has been a part of American culture for hundreds of years. Its prominence has meant that sport and sporting subjects have found their way into American art for nearly as long.

In the mid-to-late 19th century, with baseball and American football still developing, and basketball only in its nascent stages, horse racing was the long-popular pastime that America turned to for diversion and excitement. Horse-racing prints from prominent printers like Currier and Ives, oil portraits of racehorses painted for owners or trainers, decadent silver and gold trophies, and countless race-related artifacts all remain today, and speak to racing’s ubiquity. Of course, that is all not to mention the many opportunities that the sport provided for gambling, an industry which will no doubt enjoy a spike of activity this weekend!

The first horse racing track in North America was built on Long Island in 1665, and since then the sport has enjoyed immense and uninterrupted popularity. At every race track is a race track tout, a person whose advice on the race and associated bets flowed freely to anyone in earshot. In the nineteenth century, touts often cut a rather dandy figure, wearing close-cut trousers and flashy coats. The tout was such a well-known figure in American popular culture that he was a frequent subject for shop figure carvers.

Radiating confidence and success, this tout is a particularly charming example of the type. His clothing is urbane, his mustache chic, and his cigar most likely lit. Indeed, it is easy to imagine that people were buying whatever he was selling! A close relative of the so-called cigar store Indian, he would have stood outside a shop with an advertisement painted on his base. The ghost of two separate such ads are evident on this example, which must have had a long career in the commercial sector.

Based on his stance, clothing, and carving style, it is possible that this tout is the work of figure carver Charles Parker Dowler. Based in Providence, Rhode Island in the late nineteenth and early twentieth centuries, Dowler advertised that he was a carver for hire, taking on work ranging from furniture to architecture and everything in between. Folk art collectors and scholars associate him most often with carved sporting characters, often called “dudes.” Though many pieces have been mis-attributed to his hand, the resemblance is strong between this tout and the known example of Dowler’s work that belonged to a Connecticut collector and was illustrated in the 1937 Index of American Design.

This tout is just one of many fabulous folk art pieces from the Andy Williams Folk Art Collection, to be sold at auction on March 3, 2013 in Boston.

So what do the Super Bowl and a racetrack tout have in common? Great advertising!

2 thoughts on “What do the Super Bowl and a Racetrack Tout Have in Common?”