In the face of an overall lukewarm spring art market season, a number of lots in Skinner’s May 13 Fine Paintings & Sculpture auction did outstandingly well. The strongest works spanned the 19th and 20th centuries and were spread out geographically across the globe, reflecting Skinner’s reach as an auction house with many areas of expertise.

Skinner is proud to announce its first sale of an oil-on-canvas work by Claude Monet, Study of Water/An Oil Study Fragment. Although just a fragment, the painting captures the quintessence of Monet’s impressionist style, and one can just imagine it integrated in a peaceful rendering of Monet’s garden at Giverny. For whatever reason, the canvas was broken up, and this fragment passed through a number of well documented hands before being consigned to Skinner. The painting sold above the pre-sale estimate, realizing $92,250. 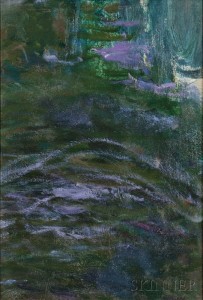 Another landscape that performed well was Celia’s Garden, by local New England painter John Appleton Brown, which also sold well above estimate at $46,125. A depiction of 19th century poetess Celia Thaxter’s garden on the island of Appledore in the Isles of Shoals just off the coast of Maine (where John Appleton Brown vacationed), the painting was probably given to Celia by the artist and remained in her family until now. Looking across the wild-flowering garden through the fence, only a sliver of the glimmering, shimmering sea is visible along the horizon. Heat emanates from the canvas and evokes those long, hazy summer afternoons.

From the shores of New England to the banks of the Narmanda River in the heart of India, Skinner offered two paintings of the Omkareshwar (Temple of Peace) by Indian artist Narayan Shridhar Bendre, which together brought in $32,595. The sale also featured another Indian artist, Jamini Roy, a contemporary to Bendre but working in a folk-inspired style. Roy’s Wedding Procession came in above estimate at $25,830. Lastly, Sri Lankan artist Senaka Senanayake’s Four Female Figures more than quadrupled its high estimate and hammered, with buyer’s premium, at $13,530. In all, Skinner’s spring auction was evidence of the continued breadth of the market for artworks of high quality, regardless of geographic origin.

Continuing our global reach, Skinner is excited to offer prominent artists in our September 23 American & European Works of Art auction. Of noteworthy mention, we will have two charming mother-and-child renderings: a sculpture by the Costa Rican-born Mexican sculptor, Francisco Zúñiga, and a painting by the Swiss artist, Hans Erni. Additionally, we will be presenting a collage by the French Informel artist, Jean Dubuffet, and an extremely rare still life representing Anemones by the British early 20th century painter, Christopher (Kit) Wood. More information about our September 23 auction will be available soon!