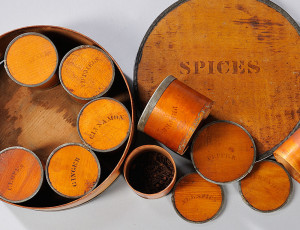 Despite the seemingly mundane individual details of this late 19th century spice box, there is an intrigue to this little domestic piece. With eight smaller containers inscribed with their respective contents, this not uncommon item found its way onto the cover of our March Country Americana catalog.

Spices and the vessels which store them have always held an important role in more than just our kitchens. Since the beginning of recorded time, we can find references to spices and their various uses. In Egypt, exotic herbs and spices were used in the embalming process. China, Korea, and India recorded the use of spices for medicinal and mystical purposes. These uses, coupled with the introduction of spice to Europe, led to the exponential growth of the spice industry.

The increased globalization and demand for spice gave rise to vast and lucrative empires. With the main production of spice situated in the Far East, trade routes, both land and sea, had to be established. European powers, including Portugal, Venice, and the Dutch East India Company, waged campaigns of exploration and war to create these new trade routes which would gain them access to untold fortunes. 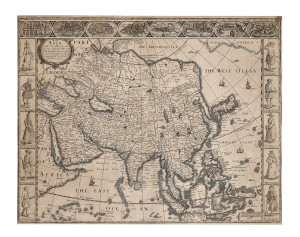 The financial cost of acquiring spices in the Far East, and of transporting them in vast fleets of ships, resulted in prices which were far beyond the reach of most Europeans. Most of those fortunate enough to afford spices were well-off merchants, businessmen, nobility, and high ranking church officials. These individuals and their families often had large, well-furnished estates that would occasionally include spice chests. These chests and their contents were grand expressions of wealth up through the early 19th century.

Although spices are readily available in today’s market, the vessels that held them are considered rarities and highly desirable. Early American and Georgian examples exhibit beautifully carved facades, delicate inlay, and great form, all qualities that are sought after to this day. Table-top spice chests from Philadelphia and the surrounding area mimic their full-size counterparts in both form and ornamentation, and garner great interest at auction. 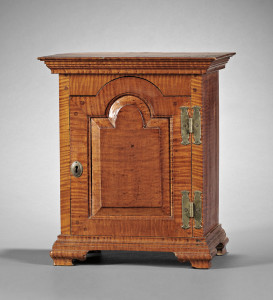 Later and more common spice boxes represent a changing 19th and 20th century aesthetic. The emphasis of our cover lot, the Patent Package Co. stenciled spice box, is on function and minimalism.In contemporary society, where flashy and overtly graphic advertisements of last century are  to austere simplicity and solid design, this group would make a fine and useful addition to any counter top, personal or professional.

One thought on “Sugar and Spice…”