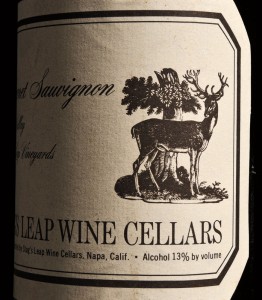 After meeting Nathan Fay in 1969 and recognizing the profundity of the cabernet from Fay’s first vineyard, Warren Winiarski went on to purchase an adjacent property in what is now known as the Stag’s Leap district and founded Stag’s Leap Wine Cellars in 1970. The first vintage was released in 1972 from grapes grown in Winiarski’s new vineyard – Stag’s Leap Vineyard – only replanted to cabernet upon his purchase two years earlier. At the time, the wine was being produced at a winery in Oakville then aged in a cellar on the new property. The next year, a winery was built on the property and that vintage is the first to be made in the new winery; three year old vines in a brand new winery. Born from these humble ingredients came the 1973 Stag’s Leap Wine Cellars Cabernet Sauvignon, a wine that just three years later would turn the wine world on its head. In the interim, legendary winemaker Andre Tchelistcheff noticed in the 1974 vintage that a particular lot within the Stag’s Leap Vineyard was particularly brilliant. This lot would be bottled separately and aged separately in the twenty-third cask, giving birth to the now revered Cask 23 bottling of Stag’s Leap Wine Cellars.

In 1976, English wine merchant Steve Spurrier sought out American wineries to be tasted blindly, side-by-side with the finest offerings of Bordeaux and Burgundian expressions of Chardonnay – the so-called Judgement of Paris. It was meant to be a celebration of America’s bicentenary, featuring a panel of French judges blindly tasting six American Cabernets and four Bordeaux (including two first growths and two second growths) in one tasting and a second tasting of six American Chardonnays with four white Burgundies. In the end, and much to everyone’s surprise, the top red and top white wines hailed from California: Chateau Montelena’s Chardonnay 1973 and Stag’s Leap Wine Cellars Cabernet Sauvignon 1973. Despite the presence of just one reporter, George Taber of Time magazine, and skepticism of the local French media, the tasting and the victorious wineries are largely credited with establishing America and California in particular as a wine region worthy of the respect of oenophiles the world over.

Throughout the years following the Judgement of Paris, Stag’s Leap Wine Cellars has continued to produce world class Cabernet from its original vineyard (now called SLV), the prestige cuvee of Cask 23 and Cabernet produced from Nathan Fay’s adjacent vineyard, which was sold to Winiarski in 1986. The winery has also expanded to produce white wines and has added more vineyards, as well as an introductory cuvee of Cabernet, named Artemis.

The lot on offer includes twelve bottles of Stag’s Leap Wine Cellars Cabernet, from the first vintage to the legendary second vintage, two vintages of the prestigious Cask 23 and a bottle of the seldom-seen 1978 Lot 2, a special cuvee of lots within the Stag’s Leap Vineyard considered by the winemaking team as “an even more perfect example of our stylistic goal for Cabernet” and served in 1983 to Her Majesty Queen Elizabeth II by President & Mrs. Reagan during the Queen’s trip to the US.