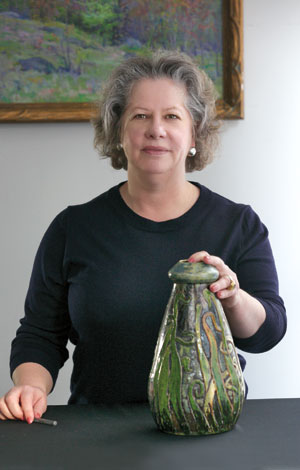 From Coral Gables, which is celebrating its 90th Birthday this year, to the Art Deco district in Miami Beach and the quirky MiMo / Biscayne Boulevard stretching north of downtown, South Florida is rich with the history of 20th Century design. On Friday, May 29th, Skinner’s Miami office will host a 20th Century Design Consignment Day from 10AM to 3PM. On hand will be Jane Prentiss, Director of 20th Century Design Department at Skinner.

Jane will be evaluating and taking consignments of glass, lighting, modern design furniture, pottery, metalwork, and textiles from iconic taste-makers throughout the 20th and 21st centuries. Jane will be joined by April Matteini, Graduate Gemologist and Regional Director for Florida. April will be evaluating Fine Jewelry from antique to contemporary pieces.  For more information or to schedule an appointment contact the Miami office at 305.503.5925 or florida@skinnerinc.com.

Skinner is pleased to announce that Jane Prentiss has been selected to be this year’s juror for the 65th Annual Members Exhibit of the Ceramic League of Miami. The theme is Ceramics in Architecture, as a complement to the mission of the Coral Gables Museum where the show will be on display in the fall.

Save the date! The show opens at the Coral Gables Museum, starting with Gallery Night, Friday, September 4th and will be on display through September 27, 2015.

Founded in 1950, the Ceramic League of Miami is a non-profit with the purpose of educating members and the general public in all aspects of ceramics. Volunteer members give demonstrations for school groups, scout troops, and at various public events throughout our community. In addition to regular classes, several visiting artist workshops are offered during the year bringing nationally known ceramicists to teach and inspire the membership and the public.

Still looking for the perfect piece? On June 20th, 2015 Skinner will host a 20th Century Design auction. Skinner’s 20th Century Design auctions are the place for collectors or home owners in search of great design and high quality furnishings and décor from the Art Nouveau, Arts and Crafts, Art Deco, Mid-century Modern and Studio movements. You will find offerings of art glass, lighting, metalwork, paintings and sculpture, silver, art pottery, and many furniture options.