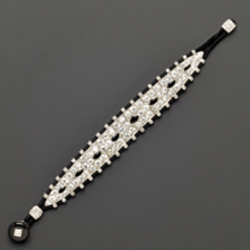 Even in our recently turbulent economy, Fine Jewelry remains as one of the strongest auction markets worldwide. Why so?  Perhaps it’s because in uncertain times, people want certainty.  Something tangible; something with intrinsic value that they need not question; something fine, and rare, and beautiful that they can hold in their hand.

If you’ve ever experienced the glitz, glamour, and style of a fine jewelry auction, then you know of which I write:  museum-quality works of art executed in the form of an etruscan revival demi parure, an art deco emerald bracelet, a diamond solitaire.

Skinner’s 2010 auctions of Fine Jewelry have featured some amazing collections, including those of Hope Goddard Iselin and Elizabeth Colt.  Mrs. Hope Goddard Iselin of New York and Newport was the the first woman to compete in the America’s Cup.  Her collection included one of the year’s top sellers at Skinner: a Cartier Art Deco platinum, diamond and onyx bracelet, which sold for $253,000, against an estimate of $30,000 to $40,000.  Also from Iselin’s collection was a pair of Cartier Art Deco platinum jadeite and diamond earpendants, estimated at $6,000 to $8,000, but selling for more than 10 times that at $118,500.

Other highlights came from the collection of Elizabeth Colt, wife of the legendary Sam Colt, inventor of the Colt Revolver. Especially noteworthy was an important antique diamond and enamel demi-parure. This wedding gift from Sam Colt in 1856 was estimated at $25,000 to $30,000, but went for an astounding $201,450 and was purchased by the Museum of Fine Arts in Boston.

The prices realized for these pieces are astounding — until you view them as works of art, then it really seems quite reasonable.

Lest we forget, part of the allure of jewelry such as this is the mystique of the families and individuals who once owned them.  The fact that these items were kept all these years, locked away for safe keeping makes their allure that much more enticing.  They were “fresh-to-the-market” as we like to say in the auction world.  The anticipation of seeing these items and the possibility of owning them translates to excitement on the auction floor.  All of which results in hotly contested bidding and high prices at auction.

For me, the highlight of the auction was the purchase of the Colt necklace by Boston’s Museum of Fine Arts. A piece as beautiful as this coming from such an iconic American family needs to be available for all to enjoy.