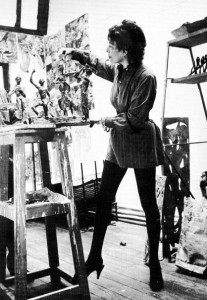 Born and raised in Vienna, Marguerite Stix was hugely influenced by the Weiner Werkstatte workshop composed of artisans working in all different mediums  and lead by Josef Hoffmann. Marguerite was considered his protégé and spent her early years surrounded by some of Vienna’s top artists including Klimt and Schiele. During this period her work was primarily ceramics, sculptures and watercolors. With the onset of WWII she and her family were forced to flee Vienna. Marguerite was fortunate enough to make it to Paris; the rest of her family was killed in a concentration camp in Poland.

Arriving in Paris penniless, she began designing a line of ceramic buttons, a genius idea considering the shortage of metal. She caught the eye of the haute couture world and started to receive commissions from Lanvin, Balenciaga, and Schiaparelli. When the Germans invaded Paris in 1940 Marguerite fled to the United States and lived in New York City the rest of her life. 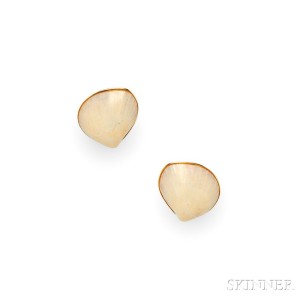 In the 1960’s Marguerite discovered her love of sea shells and traveled around the world collecting rare specimens. She and her husband opened a museum in their home, The Stix Rare Shell Gallery. She started to create jewelry using gold and precious gemstones with the emphasis of the piece based on the shell. 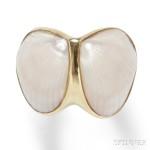 The jewelry was chic and sought after with a one of a kind feel being that no two shells were alike. Cartier retailed the jewelry and clients including Jackie Kennedy Onassis began collecting the pieces. Today on occasion a piece of her work will come up for sale at auction, Skinner is pleased to be offering a pair of Marguerite Stix earclips and a ring in our upcoming Fine Jewelry Auction taking place on September 29th in Skinner’s Boston Gallery.