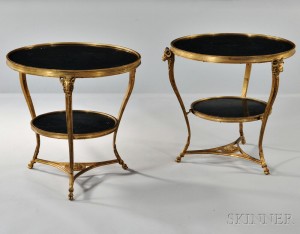 Hold on to your legwarmers! Time to get out the rugby shirts, oversized sweaters, and gold jewelry – in case you haven’t  noticed, the fashion designs of the last few years are all trending toward the color-centric hairspray-induced 1980s, and these tokens of pop culture are influencing the interior design world as well. Materials in interior design that had once fallen by the wayside in the “grey is the new beige is the new grey” 1990s through early millennium timeframe are now gaining new and colorful flavor and vibrancy as what is old is now new again.

Take marble, for instance, semi-precious stones and rock, and anything related, and flip through the latest design magazines, from Elle Décor to House Beautiful to Veranda, and you will see an explosion of interest in malachite, granite, marble, and anything that looks, well, like a dream not only to that nerdy bespectacled geology student who sat behind you in the lecture hall at college, but also to those who are now keen on outfitting their homes with the most stylish furnishings. Skinner’s upcoming European Furniture & Decorative Arts auction, on Friday, April 8th, offers over 45 lots which are comprised of marble, alabaster, hard rock or stones of different types, and is proof that Everything Old is New Again (cue the Peter Allen, please).

Here is where “Rocks Not Just for Jocks 101” meets fashion and design in the 20th-21st century: Elsie de Wolfe unabashedly adorned her own houses in France, New York, and California with marble fireplaces and Louis XVI-style marble-accented furniture in her signature je ne sais quoi style and wit. Ms. de Wolfe and her many followers, like Dorothy Draper, would heartily approve of Lot 378, the sleek and streamlined 20th century Louis XVI-style Gilt-bronze and Marble Gueridons with ram’s head monopedia. These tables are everything that an antiquarian and a newer collector would desire, and they fit in any room in the house with great ease. Another de Wolfe follower, Tony Duquette, also used marble throughout his interiors, made the use of malachite a mainstay in his designs for his signature malachite fabrics, and incorporated these elements in his design projects. Hutton Wilkinson’s equally magnificent flair for style has now taken over the Duquette name so that it can flourish for a new generation, and he has also brought back malachite in fabric and textiles. 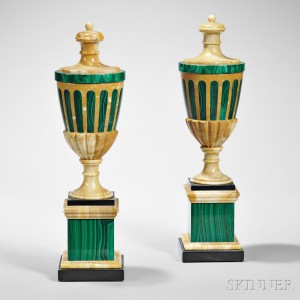 Historically speaking, though, hard rock has been of strong interest for centuries. Malachite was popular in Russia particularly in the first half of the 19th century, and Carl Fabergé later incorporated it into some of his designs. In the 1820s, an enormous five hundred ton boulder of malachite was discovered in the Ural Mountains, leading to the rise in popularity of the use of the semi-precious vibrant green stone in decorative arts. Perhaps one of its most dramatic uses occurred when Tsar Nicholas I commissioned his Malachite Room in the Winter Palace at St. Petersburg (now part of the Hermitage), and malachite was soon used in other ways to connote a social status and hierarchy. For your own home, and homage to Mr. Duquette, Lot 537, a pair of Malachite-inlaid and Marble Cassolettes, have a stately refinement and elegance that transcend time. 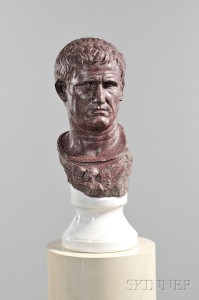 On the other end of the color spectrum, porphyry, a hard purple stone, was heavily quarried in Egypt from the first through fifth century for the Roman imperials, who sought it as a luxury item for its regal color and the difficult but rewarding pursuit of quarrying it and transporting it, a colossal endeavor. In the 16th and 17th centuries it became a popular medium from which to carve sculptures for royalty, and at Versailles one could find busts and other porphyry objects being used to convey a sense of importance and grandeur. In the 18th century, porphyry decorative arts objects were once again created to honor the Roman and Empire style once coveted by an earlier elite. Skinner’s April 8th auction features two porphyry Lots: 690, a Porphyry Head of a Roman Emperor, and 404, a pair of Grand Tour Porphyry Obelisks.

The only place on earth to find Blue John, a type of fluorspar with a rich blue-purple streak in it, is Treak Cliff Hill near Castleton in the Peak District of England.  Under Georgiana Cavendish, Duchess of Devonshire, who with her husband had a passion for collecting rocks, this delectable Derbyshire mineral rose in popularity as the English noble class developed great fondness for it, and during the Regency period it was used in tables, in tazze, and as a type of stained glass window panel to decorate the Cavendish home of Chatsworth.  Just south of Chatsworth, Baron Curzon’s Kedleston Hall was also outfitted with Blue John, where it was most notably used for a fireplace surround.  So rare is the stone that though there have been discoveries of different veins in the 1940s, again in 2013, and most recently in summer 2015 (the Ridley Vein), much of what we know about Blue John comes from its initial discovery in the 18th century.  Lot 440 is a pair of beautiful Blue John Obelisks which would highlight a bookcase, mantel, or hall table perfectly. 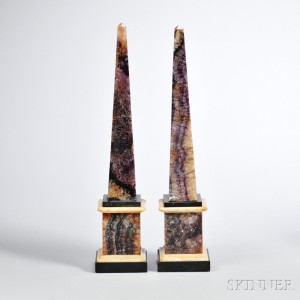 At Skinner, indulge in your need for a little rock ‘n’ roll by looking at a number of other lots in the upcoming April 8th auction. Some other items you will want to consider taking home with you for your new rock lifestyle: The Florentine Marble Bust of Caligula, Lot 303, and, for outside your house, several stone garden figures to beckon in the warmer weather, (Lots 469, 494, 495, 567, and 613) meant to be enjoyed while relaxing in even the smallest amount of green space in the city or country house you live in and call your own.