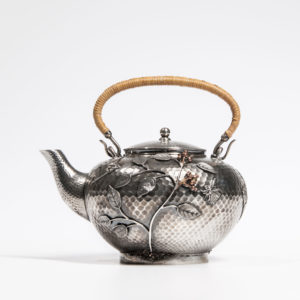 Early Georgian tableware and a strong group of American Arts & Crafts silver from the likes of Arthur Stone, Katherine Pratt, Porter Blanchard, and Mary Catherine Knight are notably featured in the 200 lots of flatware and hollowware from the United States, England, and Europe. Unique 19th-century items are also well-represented with a variety of lots from the firms Tiffany, Gorham, and Durgin. 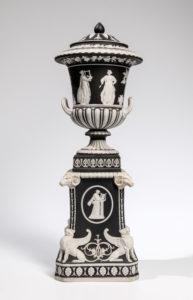 The Laver Collection of Wedgwood

Sam and Sara Laver were avid early Wedgwood and 18th century English pottery collectors from the Philadelphia area. We are pleased to offer over 90 lots from their collection, which prominently features fine examples of Wedgwood black basalt including a pair of Wedgwood & Bentley black basalt sugar dish vases and covers (lot 229), a Wedgwood encaustic decorated black basalt volute krater vase (lot 231), and a 21-inch Wedgwood black jasper dip campana shaped vase on stand (lot 252). In addition to the Laver collection are numerous other offerings in Wedgwood and English pottery highlighted by a several strong Wedgwood blue jasper and Fairyland Lustre items as well as a set of eleven Wilkinson commemorative toby jugs depicting political and military leaders during World War I (lot 394). 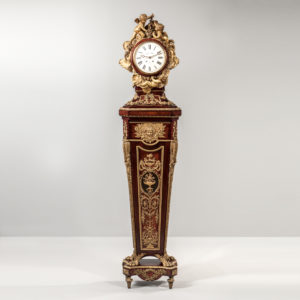 Furniture representing the work of celebrated Parisian firms that operated in the late 19th/early 20th century and produced works in the style of the 18th-century masters such as Benneman, Weisweiler, and Cressent are featured in the July 14th auction. E. Kahn & Cie. and Maison Millet each competed and medaled in the international exhibitions of the day. The Maison Millet desk (lot 459) and the E. Kahn & Cie. clock (lot 466) each exemplify their firm’s strengths in the well-cast ormolu mounts as well as the sophisticated use of exceptional veneers. In addition to these lots, the remaining 400 lots in the sale will feature an assortment of other works from decorative sculpture and artwork to oriental rugs and Louis Vuitton luggage.

Previews will be held in Boston on Thursday, July 12th from 12PM – 5PM and on Friday, July 13th from 12PM – 8PM. Free and open to the public, specialists will be on hand to answer questions.