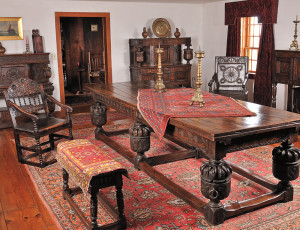 The Sara and Bob Hunt Collection of Early English Oak

The Sara and Bob Hunt Collection of Early English Oak is an exemplary collection which brings together the best elements of English craftsmanship of the 17th-18th century (and earlier), and will be featured as part of the European Furniture & Decorative Arts auction on July 18th, 2015. Highlights from the sale to be auctioned include the following oak pieces and Bellarmine, which reveal many stories about how they were used, and how they could fit into your home today.

Trees that were used to create oak furniture during its height of popularity in the Elizabethan period were often 150-200 years old.  Most trees this age would be about 100 feet tall, and single planks were often used to construct cabinets and tables, and are most desirable for the collector when such craftsmanship is used.  In England it was not unusual to find oak also applied to the walls of the home, as a weatherproofing mechanism, eventually called clapboard or wainscot (“wainscot” is found in Chatsworth’s records as early as c. 1600). Oak was used in everything from construction of houses, furniture, to ships – it provided heartiness, strength, and longevity under the harshest conditions.

The Elizabethan table in the 16th-17th century was used as a multi-functional object.  It was a dining table, a meeting table, the type of table that would be found in the country/manor house world, when English country houses were used for seats for political power, and often were villages unto themselves.  Some of the finest Tudor furniture can be found in England at Hardwick Hall, Knole, Parham House, and others, filled with furniture crafted of solid oak, like the grand example in Skinner’s July 18th sale, with its playfully pompous and hearty bulbous cup and cover posts at the ends of the table supporting the table’s long board surface.  In the Elizabethan era, furniture seldom held just one specific location in a household, but was moved from place to place, or against the wall, depending on how a room was to be used.  So, a removable top for a large table like this one would be out of sheer necessity so the table could in fact be moved, though larger tables no doubt were moved less often than smaller pieces of furniture.

Today, this table could be used in a large great room, would look striking with tall, clean-lined chairs of wood or leather, and the heavily carved posts are elegant and substantial all at once.  Or for those with more traditional tastes, the table can transition from many different time periods to blend with many flavors of furniture and interior schemes.  Note on the Lot 12 withdrawing table the large iron ring at the corner– perhaps used to keep man’s best friend nearby. 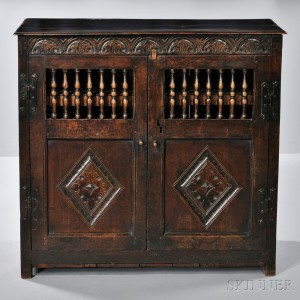 Livery cupboards were used in English households for food, drink, and candles, a practice which originated as early as the 15th century, when supplies were often put in the upper reaches of the cupboard as an allowance for a guest in the middle of the night.  Many examples of these cupboards were made with turned stiles in the upper portion of the cabinet, as also appears in the livery cupboard in the July 18th sale. Spindles on the upper regions of the cupboard were often made to allow air circulation, while the location of the storage of food and supplies would keep it off the floor away from small furry scampering “guests”.  As early as 1483 mentions of livery cupboards can be found, and though the practice of distributing supplies to bedchambers of each member of a household, including guests and servants with overnight supplies somewhat dwindled by the 17th century, the term was still often used into the later period.  In a long Winter’s night, with no electricity, it had been necessary to outfit the cupboard with loaves of bread, wine, and “one percher wax, one candle wax” (written in 1483 in The Black Book) (p. 335, Victor Chinnery, Oak Furniture: The British Tradition).

Today, a livery cupboard could be designed to fit in a foyer, a dining room, a kitchen, a bath, a bedroom, to hold any number of supplies or books that one needs to keep handy.  Our modern sensibility will enjoy the simple lines of the livery cupboard, its geometric carved lozenge base, the strikingly cool and almost Mediterranean/Minoan-styled lunette frieze at the top, and deep, rich wood.  And it’s sturdy oak wood and storied past make it a great purchase to talk about and enjoy for another few centuries. 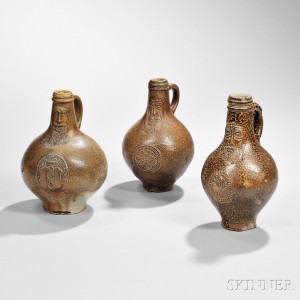 Items featured in the Sara and Bob Hunt Collection of Early English Oak that are not oak but were important to the early home are three Bellarmine jugs from the 17th century.  The Bellarmine (or Bartmann) jug has been long researched by collectors fascinated with the unique male faces/relief masks that are inscribed into the necks of the jugs, and often have varied motifs inscribed into the bulbous bodies.  The myth of the Wild Man, states David Gaimster in German Stoneware 1200-1900 was part of Northern European folklore predominantly in the 14th-16th centuries, often appearing in textiles, metalwork, glass, and other elements now known as decorative arts/material culture. “Wild Men” lived in the forested mountains of Germany or in Tyrol, and appears in stoneware as early as the 15th century. These jugs have characteristic “Wild Man” faces, coat-of-arms, rosette medallions, and other recurring motifs such as the ones represented in Lot 102. By 1700, these armorial devices almost all but disappeared in favor of other relief ornamentation.  Underwater archaeological expeditions of Dutch East India ships have recovered remains of them for further study, as well as archaeological sites ranging from Maine to Virginia in the United States. In Skerry and Hood’s Salt-Glazed Stoneware in Early America they describe The Wild Man as being phased out gradually as jugs in the 18th century were made with and without faces, as a newer demand for English brown stoneware took over with England’s newer dominance in the market and the decline of Netherlandish naval control.

Collectors at Skinner enjoy the stories that the “Wild Man” Bellarmine can tell, of days of oak, of manor house and country estates, the world market on creaking oak ships, and the longevity and timelessness of good design and craftsmanship.