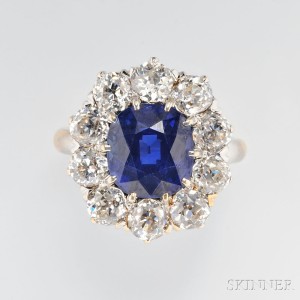 When it comes to colored stones, geography is often as important as gemology. While it is their gemological properties that ultimately make them so coveted, collectors have long sought out colored stones based upon their place of origin.

For sapphires, the scarcest and most rare stones come from Southeast Asia. To trace their origin, first we must travel high in the Himalayan Mountains, in very inhospitable terrain, to a deposit of sapphires discovered in the late 19th century. Today these stones are referred to in the trade simply as Kashmir. The original deposit was rather quickly depleted; later mining efforts were not fruitful. The majority of the sapphires in the market today with the Kashmir label were mined during the very short lifespan of that original mine, which accounts for their rarity. It is the unique and undeniably breathtaking visual characteristics of these stones that have drawn the attention of royalty and potentates for over a century.

Sapphires from Kashmir have an intense depth of velvety blue. The velvet appearance of the stones comes from microscopic layers of inclusions, so tiny that they do not negatively affect the stone’s transparency, but scatter the light within and actually enhance its visual appearance. This gemological property is unique to sapphires from the Kashmir region. These stones also typically lack the green or pink modifiers to the blue color that you might find in sapphires from other areas. 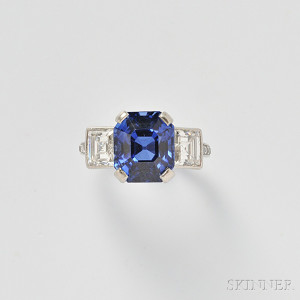 Skinner is featuring a beautiful Kashmir sapphire ring (Lot 463) in the June 9th Fine Jewelry auction in Boston. The cushion-cut sapphire is framed in old European cut diamonds in a classic ring design by Howard & Co., a firm operating in New York from 1866-1922. The sapphire is accompanied by an origin certificate from the American Gemological Laboratory (AGL) in New York, which also states no evidence of heat treatment.

Moving slightly south and east on the map we reach Burma (Myanmar). Sapphires from Burma are exquisite.  They are exceptionally transparent crystals with an even, intense blue hue. This color is often the color that all other sapphires are judged against.

Lot 469 in the June 9th Fine Jewelry auction is a fine example of a sapphire from Burma set in a ring originally retailed by Tiffany & Co. The stunning 8.63ct emerald-cut sapphire is flanked by two square-cut diamonds each over one carat, and is also accompanied by a certificate of origin from AGL stating there is no evidence of heat treatment.

Like their corundum sister the sapphire, the Burmese ruby, has long been prized for color. References to rubies and Burma date back to the sixth century. The stone’s red contains a hint of hot pink, which makes it brighter and more vibrant than rubies from other locations. Queen Elizabeth often wears a tiara containing 96 Burmese rubies, a gift from the Burmese people on her wedding. 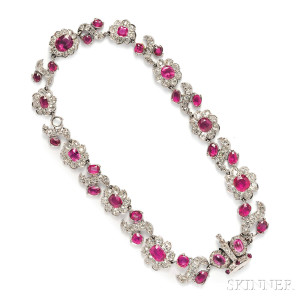 Lot 462 is an antique necklace featuring 33 graduating Burmese rubies accented by rose cut diamonds.  A fine example of the splendor of the red color only coming from Burma. This lot is also accompanied by origin documentation from AGL stating that there is no evidence of heat treatment.

Stunning colors and exotic origin give sapphire and ruby jewelry a special place in any collection. The June Skinner Fine Jewelry Auction features several signature pieces that will thrill even the most discerning connoisseur.