At about  9:00 A.M. on the morning of April 19th, 1775, approximately 450 men from Concord and the neighboring towns of Acton, Lincoln, Bedford, and Westford congregated on a rising pasture above the North Bridge. Capt. David Brown, one of the captains of Concord’s two minute companies, happened to own the pasture, which had a good view of the bridge. In the town, 700 British grenadiers and light infantry had arrived to look for large quantities of hidden military supplies and arms.

A sense of uneasiness likely ran through the company gathered that April day as the men pondered what was going to happen that morning. Would cooler heads prevail? Or would there be a fight? 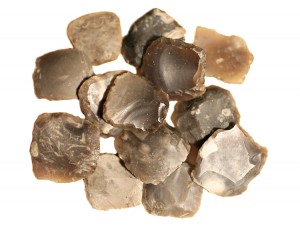 Earlier in the morning, some of these men had marched towards Lexington and met the oncoming British column at Meriam’s Corner. The minute men about-faced, then marched back through town and across the North Bridge. Now, approximately 96 light infantry men stood positioned just below the larger gathering to hold the North Bridge and roads to it.

As more colonial reinforcements arrived on the field, Lt. Joseph Hosmer of Concord, acting as adjutant, began to organize the men into line, and the officers met to decide their next move. Col. James Barrett rode along the line on horseback cautioning the men not to fire, and then joined the assembling officers. The men checked their muskets and changed flints, probably wiping the locks of the guns to clear the early morning spring dew.

We know that these men changed flints that morning because over 150 years later, Concord resident and archeologist Benjamin Smith found many of those flints, resting in that same pasture, known today as the musterfield. Smith didn’t set out to uncover a part of American military history. He was a collector of Native American objects, and noticed in the fall of 1934 that the site had been plowed for the first time in his memory.

As he searched the area, he found seven English musket flints. That evening it rained quite heavily, and the next day Smith searched again. In a speech he wrote for the Concord Patriots Day ceremonies in 1961, he stated:

“The following day the field was revisited. Gun flints seemed to be everywhere and they stood out against the dark, wet ground like glittering jewels. Thirty-seven more were recovered that day and it was by then clearly apparent that, after making allowance for the natural disturbance of the plowing and the fact that the men may not have discarded the flints in the same manner, they occurred in two long lines about fifty feet apart and running N.E. to Southwest across the slop of the hillside, roughly facing the North Bridge roadway.”

Within the next few years he had found a total of one hundred dropped flints. About seventy of those now reside in the collections of the Concord Museum.

Will you let them burn the town?

As the group of men gathered in the pasture tried to decide what to do next, smoke began to rise from the town. The British troops had begun to burn what meager martial supplies they had found and the spreading flames had caught the town house on fire. The sight of smoke created a stir among the men waiting above the bridge in the musterfield. Lt. Hosmer barked, “Will you let them burn the town down?”

The men at that point had a grave decision to make. Did they let the town burn, or march and fight against their own king’s army? They chose to march in defense of the town, a war began, and a country was born.

The flints pictured here are now a poignant reminder of the men who stood in the musterfield that fateful morning, and the decision they made which still resonates to this day.

The flints are part of a special exhibition, The Shot Heard Round the World: April 19, 1775, which is on view at the Concord Museum through September 2014. Curator David Wood and I worked together on the research for this exhibit. I hope you’ll be able to attend.