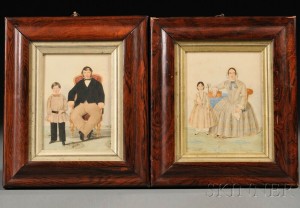 When I first saw these pictures, they looked much like any other attractive pair of miniature portraits that we sell in our American Furniture & Decorative Arts auctions. Who could have guessed at first glance that they could be extremely rare pieces painted by a one-time criminal?

We found the portraits in a house in the midwestern US this past summer. It was the kind of house I personally like to see, because it was full of things collected for their quality and individual charm. The owners brought each object home because they loved it, not because it might fit into a cohesive whole. As a result, the house contained everything from Native American artifacts to sailor-made items like scrimshaw-carved whale’s teeth, and from primitive American folk art and duck decoys to a fancy red-lacquer commode. It was the perfect example of diversification in collecting.

A colleague and I found the miniature portraits in the front parlor of the house, among a host of framed items. The watercolors had nice 19th century rosewood-veneer frames, and in my experience, they seemed very much in the Western European, if not necessarily English, tradition. We estimated them at $400 to $600. The Skinner transportation crew packed up the portraits and brought them to our warehouse in Massachusetts, where we photographed, cataloged, and lotted them in our March 3rd, 2013 Americana auction.

Only later, when we viewed the portraits out of their frames, did we discover that they were signed! It turns out that the works were by a little known, but highly collectible, artist named Charles Henry Theodore Costantini.

Costantini spent time in England, and was sent to Australian penal colonies twice in the 1820s, first for forgery and later for stealing ten pounds. Apparently, he was a better painter than criminal. He must have liked Australia, despite the fact that he was in jail during most of his time there, because when he was granted his freedom in 1834, he stayed and painted, spending most of his time on the island of Tasmania. According to one source, only about sixty of his works remain – and we had two!

In the weeks leading up to the auction, we fielded a dozen or more calls from clients in Australia, all of whom were excited to witness the appearance of Costantini works in an American auction. Because there is an 18-hour time difference between Boston and Sydney, most of them were either awake very late or up very early, and very highly over-caffeinated, when they called. Each of them probably thought he or she was the only one who had noticed these two unassuming watercolors in our Boston auction.

As the Australian phone calls kept rolling in, it hit us how effortlessly global the auction market has become. Our department may be located in New England, and we sell mainly American antiques in our auctions, but our international audience grows larger every year. With the help of the internet and search engines, it’s almost impossible now for anything good to slip through the cracks in an auction, even when over 10,000 miles separate the object and its audience.

When the auction came around, two determined phone bidders chased the little paintings to $12,000, an American record for the artist. Our buyer was happy, our consignor was happy (and quite pleasantly surprised), and Skinner was happy.

Finding extremely rare objects among ordinary antiques is a rare and special occurrence, and every time it happens at Skinner, it’s the best kind of surprise.