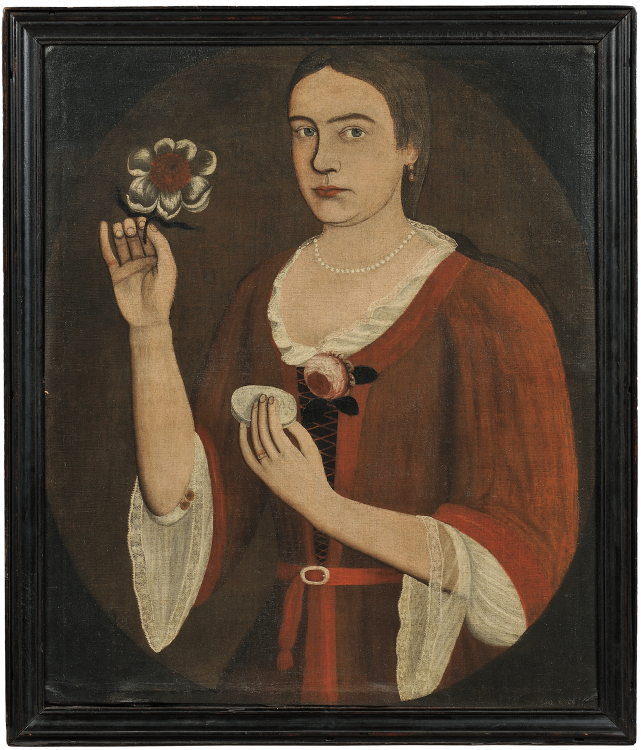 The Portrait of Elizabeth Van Dyck Vosburg is one of the ultimate rarities: a unique and early example of American naïve painting from the early 18th century. This oil-on-canvas work was painted by an artist widely known as The Gansevoort Limner, who some scholars believe was a Dutch-born immigrant named Pieter Vanderlyn. Whatever the case, this artist was prolific in the period  from about 1730-45 in the area that would become New York State.

Known works by The Gansevoort Limner number less than two dozen and most of these are housed in public collections, notably the National Gallery of Art in Washington, DC, and the Metropolitan Museum of Art in New York City.

Besides its incredible rarity, this folk portrait differs from similar works thanks to its singular state of its preservation. It has never been lined (a process done usually to stabilize the original canvas), and, remarkably, still retains its original black-painted frame in the Dutch style 287 years later! Minor, scattered spots of repaint exist to strengthen the original paint layer in places, and there are several minor patch repairs, though all were done with a very careful hand. The back of the canvas, the pine frame, and the stretcher all exhibit the characteristic blackening caused by nearly 300 years of oxidation — something we love to see — and  a clear indication that the painting is still in its original presentation. We’re seeing it just as the artist intended it to be presented in the early 18th century. 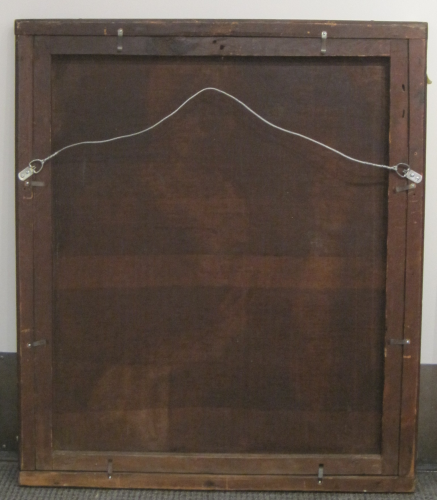 Elizabeth Van Dyck was christened in April 1697, in Albany, New York, the second of her parents’ eight children. We see her here, at the age of 28, half-length, standing and facing to her right. The thumb and forefinger on her right hand delicately pinch the stem of a flower blossom, and her left hand clutches a patchbox with the initials E and M – hers and that of her husband, Martin, presumably upon the occasion of their marriage.

The overall look of the work is one of folk art, and The Limner’s oeuvre is indeed “folky.” His paintings typically present flattened representations of his sitters and surroundings, and he worked in a semi-itinerant manner outside the realm of academically trained painters. Both traits are highly characteristic of folk artists in the 18th century.

When one places the artist and his sitters in historical context, The Gansevoort Limner’s works speak equally strongly from this perspective as well. The marriage between Elizabeth and Martin was a union between two Dutch families in the Hudson River Valley. The portrait of Elizabeth exhibits a pure Dutch influence which, later in the century, would attenuate and disappear as the settled Dutch of what would be New York State began to lose their identity. The portrait of Elizabeth stands as a testament to a moment in Colonial America’s history when settlers from Holland were among the most influential residents in the future United States – a fact often forgotten in modern-day discussion.

Accompanying the work is the 1702 Amsterdam-printed Van Dyck family Bible which includes family papers dating to the 18th and mid-19th centuries. The Van Dyck papers provide a wonderful a snapshot into their lives. One document is the early pen and ink family register, listing marriages and births, and written in Dutch. An additional document, from 1868, is a lithographed (mass-produced) marriage certificate of a Van Dyck family wedding. By then the early 18th century Dutch colonists had become a well-assimilated, late 19th century American family.

Much of what had made the Dutch unique when Elizabeth was painted – especially the connection to the material culture of their homeland that Elizabeth embodies – had disappeared into the melting pot that was the post-civil war United States. Taken together, the Bible and papers help to tell the specific story of the painting’s history, the history of the Van Dyck family, as well as the larger story of Dutch assimilation in America.

This is the earliest American portrait Skinner has ever offered and we are delighted to be able to present the painting at auction this weekend. The opportunity to own an American painting made in 1725, having survived in a nearly untouched state of preservation, comes along rarely. Stop by the Boston gallery if you can – we’d be happy to show it to you!