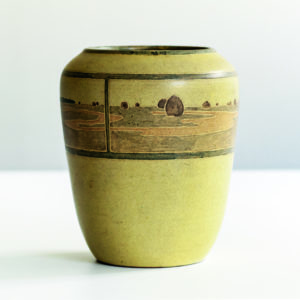 Dr. Herbert Hall started the Marblehead Pottery in 1904, as therapy for patients at his Devereux Sanitarium. His therapeutic workshop evolved into a business, and in 1915, Arthur Baggs took over the production operation and continued to produce the pottery until 1936.

In 1909, this vase was designed by Annie E. Aldrich, thrown by John Swallow, and decorated by Sarah Tutt in the Marblehead Pottery workshop. It is one of four known examples, two of the others are in the collections of the Art Institute of Chicago and the Two Red Roses Foundation, Palm Harbor, Florida.

This landscape vase is decorated in the style of Arthur Wesley Dow, depicting haystacks in a marsh. A fine example of the work produced at the Marblehead Pottery, as characterized by its simplicity of form and decoration, as well as its distinctive matte glazes.

This rare Annie E. Aldrich and Sarah Tutt Marblehead Pottery Vase will be offered in the 20th Century Design auction on December 14th.