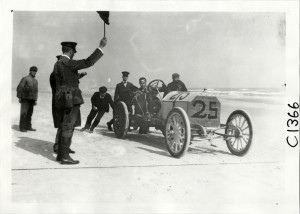 View of William Wallace and passenger in Fiat car no. 25 at starting line during the 1905 Ormond-Daytona races in Florida. Courtesy of the National Automotive History Collection, Detroit Public Library

Before the Indianapolis 500 and the Daytona 500, some of the earliest automobile inventors, owners, and enthusiasts went to race in Ormond Beach, Florida. Races there began in 1902, but by the 1903 and 1904 races, world records were being broken and Ormond Beach was nicknamed the “Birthplace of Speed.” Motorcycle and automobile owners and racers brought vehicles that used gasoline, steam, and electricity from across the United States as well as France, Germany, and England. All of the great marques of the era, including Fiat, Napier, Mercedes, Darracq, and Oldfield’s big Blitzen Benz were represented in the races. But by 1910, the allure of the beach races began to dwindle as Indianapolis Motor Speedway, constructed in 1909, provided a better spectator experience and was closer to some of the biggest US automobile manufacturers, making relics from this short time in racing history all the more exciting. 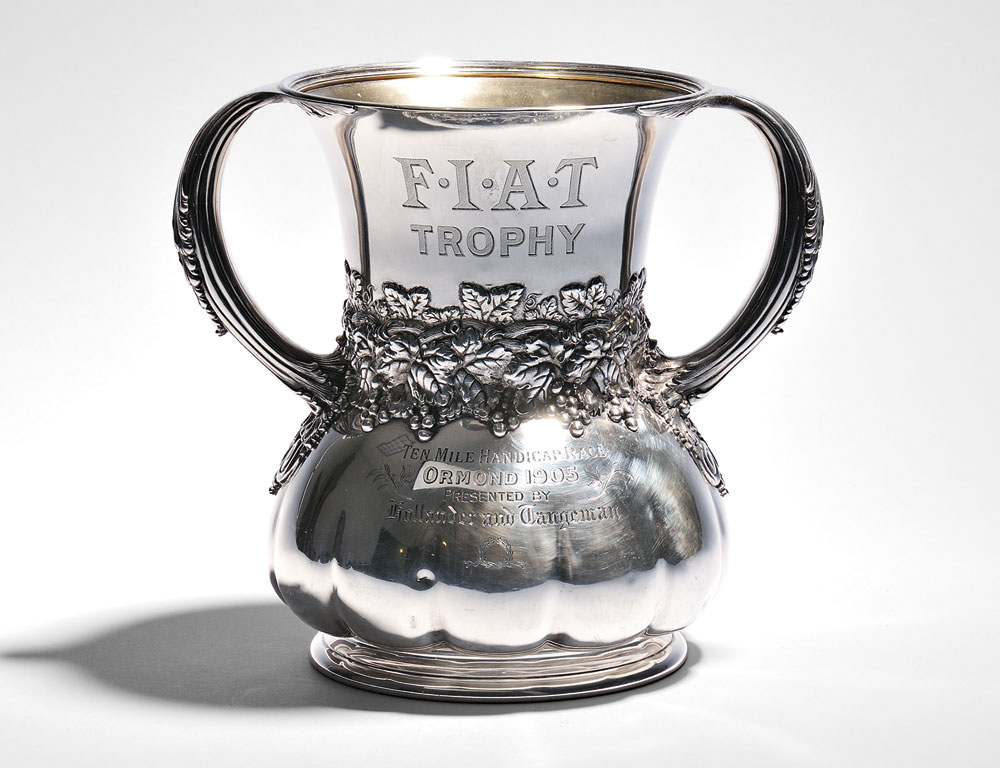 Skinner is pleased to offer a trophy from one of these Ormond Beach races in the Fine Silver segment of the European Furniture & Decorative Arts auction on January 9th. This trophy (Lot 96) commemorates a 1905 win in the 10-mile Fiat Trophy Race by Boston native William Wallace, with a time of 6 minutes 54 seconds. An active member in racing circles, he was chairman of the Massachusetts Automobile Club race committee, a member of the national racing board, and the only Vanderbilt Race commissioner to drive in the races. A gentleman sportsman, like many at the time, Wallace was also a vice-president of the Boston Insurance Company. Commissioned by Hollander & Tangeman, Fiat’s American agents, and produced by Tiffany & Co., this trophy is not only a wonderful piece of silver in its own right, but also a piece of early automobile racing history.

We hope that you will come see this trophy along with many other fine offerings in the sale during the public previews in our 63 Park Plaza Gallery in Boston on  Thursday, January 7th from 12–5PM and Friday, January 8th from 12–8PM. Bidding for the European Furniture & Decorative Arts auction begins at 10AM Saturday, January 9th, 2016.