It’s no coincidence that the cover lots for this season’s Gentleman’s Auction are puzzles designed by Stewart T. Coffin. The puzzles are dual purpose: at once objets d’art suitable for display in a museum and an embodiment of ordo ab chao. When the puzzles arrived through our Modern Design department, I knew they were perfect for this auction.

Of the eight puzzles included in the collection, only four arrived assembled. I’m not sure if this was a test from the consignor for us to prove our mettle or if they had never been assembled in the first place. Needless to say, I took it as a challenge. How hard could it be? Most of them even came with instructions! 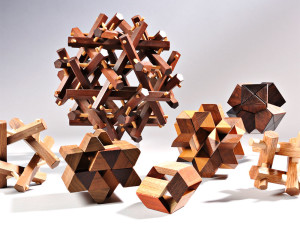 The two puzzles from lot 1051, Four-Legged Stand and Pentagonal Stand went together relatively easily. The hexagonal sticks of oak and walnut resting against one another and pinned together with birch dowels, neatly matching the drawing on the instructions included with each puzzle. And then, Second Gear. Four beautiful woods, six seemingly simple pieces and instructions that offered little in the way of guidance. A clue in the instructions only made sense to me after final assembly.

I met my match (temporarily) with the next puzzle. The instructions included with the pieces seemed to indicate that this puzzle had three possible solutions, all of which seem plausible given the pieces I had and the arcane magic that I’d just witnessed in the assembly of Second Gear. Over time, however, I realized that these instructions were for another puzzle absent from this group. Now I really needed help, so I turned to the book included with lot 1051: The Puzzling World of Polyhedral Dissections.

Eventually, I found an image of what appeared to be my puzzle: Three Pairs. Described in the text as a variation on the Square Prism design, I was heartened to read “this amazing puzzle, with its six simple pieces, has baffled experts.”  Once I found the design’s name, I thought it may unlock some heretofore hidden secrets, only to further read “Even the name is a joke!” Mr. Coffin may be a gentleman, but he is clearly also a diabolical wizard. It took hours, but I was able to finally lock the pieces into place, the square prism design enhanced by the grains of the wood. 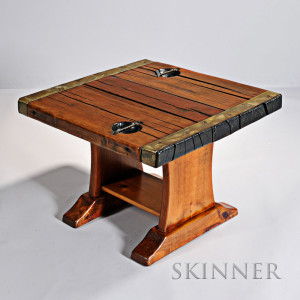 With the Gentleman’s Auction, as with the puzzles, lots from these dissimilar departments – a Russian Surface-to-Air Missile System, a Les Paul Gibson guitar, a Wood Plank side table, 18th Century silver, Domaine de la Voute Cognac, a Short & Mason Mahogany and Glass Barograph  – come together in a space that may not have seemed obvious from the outset. The puzzles go on a desk, along with a George II sterling silver desk set, next to the Dunhill and Dupont Roller pens, with a Mahogony Quarter-chiming Bracket clock chiming in the background, a photograph of Brian Jones or Duane Allman on the wall and a Senneh rug beneath your feet… somehow it all fits together.