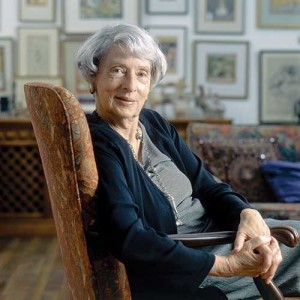 Professor Douglas Wheeler of the Department of History at the University of New Hampshire described his colleague Professor Marion James as “a true adventurer in the classic sense” when paying tribute to her at a memorial service last year. Born April 3, 1918 in Durham, New Hampshire, Marion James rose to the position of Chair of the Department of History, and was noted as an advocate of broadening the classes offered at the University to include world history.

Professor James’ lifelong interest in the history and literature of the Middle East led her to travel to Iraq, Afghanistan, India and Syria from the 1960s on, often alone, with sometimes as many as five repeat visits to a country of particular fascination, such as Afghanistan. While traveling she began to collect works of art that interested her, which she used as teaching materials in her classes on ancient history. 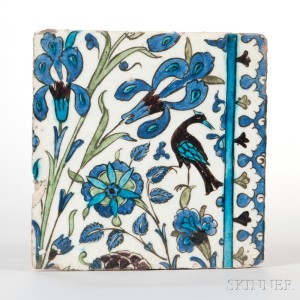 Her deep exploration of the history and culture of these parts of the world is evident in the portion of her collection that Skinner is proud to offer. From exquisite Indian and Persian miniature paintings to Moroccan, Syrian, and Turkish ceramics, no two pieces are very similar, nor are superfluous in representing a particular location, period, or technique. The objects in her collection take us on a tour of the places that piqued her interest.

Ceramics produced in Damascus, Syria were heavily influenced by Chinese blue and white pieces that were imported from the late 14th century onwards. Syria’s developed style of decoration was later further combined with Iznik colors and motifs, when it became part of the Ottoman Empire in the 16th century. Lot 26, a lovely Syrian tile exemplifies this confluence of influences with its vibrant blue hues and delicately curving floral sprays. 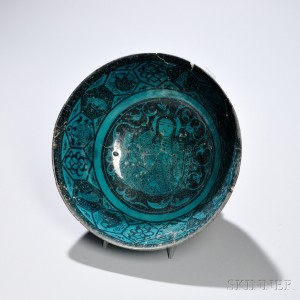 First developed in Iraq in the ninth century, lustre glaze became popular in Seljuq Iran in the 12th and 13th centuries, and the production ultimately became centered in Kashan. Lot 40 is an example of this complex technique, which involved decorating a once-fired piece with a combination of sulphur, silver and copper oxide, and ochre, which was then fired again and the ochre removed to reveal the metallic designs beneath.

Kashan was also renowned for its vibrant turquoise glazes. Lot 37, a Kashan deep bowl provides us with a rare example of a turquoise-glazed piece with multiple figural decorations in hexagonal reserves. (A similar shallow dish, also from James’ collection sold earlier this year for $20,910).

Professor James’ collection is a rare treat, reflecting her courageous, wide-ranging travels with the impressive range of styles and regions that it encompasses.