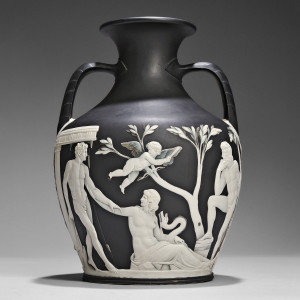 One of the most famous surviving Roman works of art, The Portland Vase, is a fused glass vase and was believed to have been made during the reign of Augustus, sometime between 27 BC and AD 14. It consists of two layers, a dark blue overlaid with a soft white. The relief was cameo cut by gem engravers of the highest order and is considered a masterpiece of its kind. At some point the base was damaged and an additional disc was added showing a portrait of a man wearing a Phrygian cap. The vase had been part of the collection of Cardinal Francesco Maria del Monte (1549-1627). On the death of the Cardinal in 1627 the vase was purchased by Cardinal Barberini and remained within the family until it was sold in 1780. It’s believed that the buyer was a dealer, James Byer, who subsequently sold the vase to Sir William Hamilton, who a few years later sold it to the Duchess of Portland. Sadly the Duchess died shortly thereafter, the vase offered amongst her possessions at auction in 1786 and bought by her son, the third Duke of Portland. 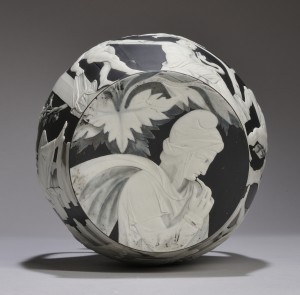 John Flaxman, Jr., the outstanding 18th century sculptor, brought the vase to the attention of Josiah Wedgwood in 1784. Josiah borrowed the vase from the Duke of Portland with hopes of producing the piece in jasper. With classical figures believed to represent the myth of Peleus and Thetis, the challenge was replicating the relief ever so thinly in jasper that it still retained the depth and transparency of glass. This was achieved not only by modelers but additionally by the application of shading with a thin layer of liquid black slip. Much experimentation in Wedgwood’s attempt to perfect an imitation of the glass vase included many trials in the development of a pleasing black colored ground, a look and touch of the original and successful firings. Early obstacles with trials included heavy blistering to the body, cracking to the relief as well as a lack of refined undercutting. It was not under 1790 that Wedgwood had a truly successful copy of the Portland vase, and even then production was still very slow and difficult with much trouble with blistering during firing. 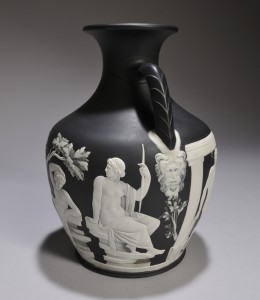 Wedgwood’s oven records list forty-three of these “first edition” vases fired between 1791 and 1796. Eleven were broken during the process with number of additional faulty vases unknown. It’s generally believed that somewhere around thirty of these black jasper vases were of first quality. Most, if not all, of these remaining vases bear a number inside the rim inscribed with manganese pencil. It’s important to note that none of these eighteenth century examples bears the impressed factory mark, but all share similar traits. They each have a very smooth, silk-like black surface, often silky like, with an equally silk-like relief, crisply modeled and tinted throughout. The modeling of the underside of the base runs edge-to-edge, where in later editions there is a slight gap or border between the edge of the disc and the relief.  The handles are set at a slight slant from upper left to lower right, opposite from the original Barberini vase. Additionally, it is evident that the base on these first vases were manufactured separately from the vase body and adhered prior to firing.

Over the span of the last 270 years Wedgwood has manufactured a wide array of Portland vases, in a variety of sizes, colors, body types and qualities. There are many of them in collections spanning the globe. Few, if any, compare in some way to these early first edition vases.

Paul Lauer purchased the number 22 first edition Portland vase at Sotheby & Co., London as Lot 112 of the Oster Collection, on November 30, 1971. This vase will be offered as Lot 365 in our European Furniture & Decorative Arts auction on July 15, in Marlborough included in The Estate of Paul Lauer, Part I. As noted in the Oster Collection catalog, “The vase was exhibited at the Royal Ontario Museum of Archaeology from 1951-53. This is the Beaufort-Codrington copy. The Dowager Duchess of Beaufort is mentioned in Byerley’s pocket book among those who has subscribed for a copy of the Portland Vase, but there is a note ‘Copy not received up to 1799’. It must have been delivered between then and her death in 1831. The vase likely entered the Codrington family of Dodington Park, Gloucestershire when the Dowager Duchess of Beaufort’s great grand-daughter, Lady Georgina Somerset, married Sir Christopher Codrington in 1836. It was bought by a dealer at the death of Lt. Gen. Alfred Codrington, G.C.V.O., K.C.B., in 1945. It was sold to Mr. Oster in 1953.”

WEDGWOOD, by Robin Reilly, volume 1, illus. 1036, shows a copy from Tom Byerley’s notebook from 1789 with list of subscribers clearly showing an entree for Dowager Duchess of Beaufort.