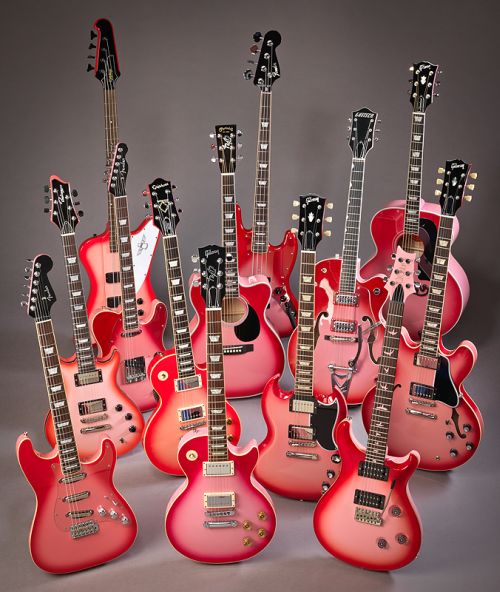 It was 10 degrees in Manhattan when I entered the Upper West Side apartment building where Jay Jay French, legendary Twisted Sister guitarist, lives. When I rang at his door, he opened it with a wide grin and invited me into what could only be the home of a well-played musician. Walls decorated with gold records, rare original vintage Beatles and Rolling Stones photos, memorabilia of Old New York celebrities and entertainers, a state-of-the art sound system, and stacks of guitars, including thirteen bright pink axes that belong to the Pinkburst Project.

The Pinkburst Project is the result of years of effort on Jay Jay’s part to collect custom made guitars modeled after his pink sunburst Gibson Les Paul. With Jay’s Jay’s clear intent and very persuasive manner, he was able to turn the competitive nature of the major guitar companies into positive, creative energy. It’s an amazing bit of diplomacy. The complete collection includes thirteen custom guitars along with a set of amps and accessories. Gibson, Martin, Fender, and many more all came together for a common goal: to support uveitis research. Jay Jay’s daughter was diagnosed with this degenerative eye disease at age six, and the proceeds of the Pinkburst benefit auction at Skinner on May 1, 2011 will go to the Ocular Immunology and Uveitis Foundation.

At the heart of this project are the guitars, and the thirteen guitars in the apartment took my breath away. They were spotless and new, almost too nice to play. My guess is they’ll appeal to collectors looking for exquisite trophies. 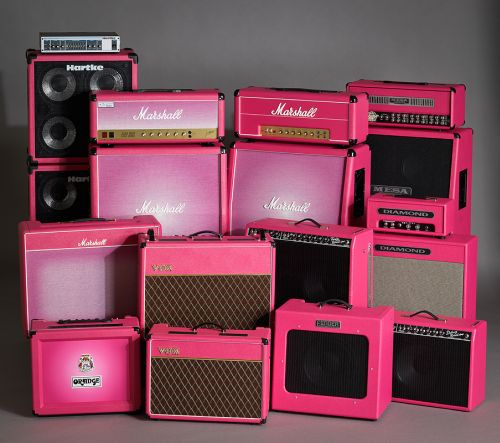 The detail and quality of every single guitar is extremely fine—it’s not at all what you’d find on a regular stock guitar. Each custom built guitar embodies the maker’s ideals as a master luthier, but also conforms to the overall design and spirit of the Pinkburst Project, with even a bit of a sense of humor. The Fender Telecaster and Stratocaster have a black peg head with the Fender name in pearl inlay – a feature not typically found on Fender Guitars. All of the guitars also have see-through pick guards, and they all had a different idea on the gradient of the pink sunburst. They’re all totally unique and beautiful instruments.

The Pinkburst collection is a first in the history of American guitar making: there has never before been a collection of guitars built by so many different makers with the same major design elements. These instruments may be collector’s items, but to the makers such as Gibson, Martin, John Cruz of the Fender Custom shop, Juha Ruokangas and Paul Reed Smith, they were built with the ultimate goal of tone. They were built to play beautifully, and to focus the world’s ears and eyes on a medical research effort that deserves our support.

Be sure to read all about the axes at pinkburstproject.org.