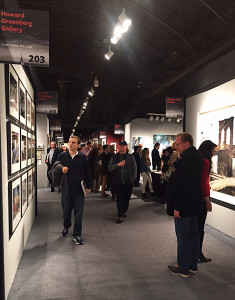 Visitors to the fair.

Whether you are a nascent or seasoned collector, or simply interested in honing your visual eye, you can see a broad range of amazing photographs and photo-based work at the annual Association of International Photography Art Dealers (AIPAD) Photography Show held in New York at the Park Avenue Armory every spring. Acting as the collective voice of the art photography dealers that make up its membership, AIPAD, according to the group’s mission statement, “is dedicated to creating and maintaining high standards in the business of exhibiting, buying and selling photographs as art.”

Celebrating its 35th year, the 2015 AIPAD Photography Show New York was held April 16-19 and featured 89 exhibitors from North America, Europe, Asia, and South America. Attendance was strong in spite of the long-awaited and spectacular spring weather. I was delighted to be among the 12,000 people who visited the fair to pour over the fantastic photographic offerings from across the world.

The works on view run the gamut from early cased portraits and vernacular material to contemporary photography. Nineteenth-century photography is well represented as is 20th century modernism, social documentary work, abstract imagery, and even time-based media. At AIPAD, there is always something for everyone!

Here are some of my highlights:

The AIPAD Photography Show is a great way to see a staggering amount of photographic work in one place (the historic Park Avenue Armory, which is a pleasure to visit in and of itself) so start making your plans for springtime in New York in 2016!