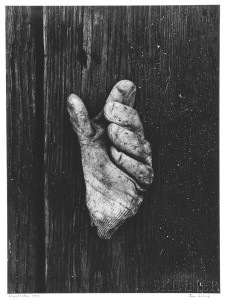 Skinner’s January 23 Fine Photographs auction in Boston features eight lots by the important 20th century American photographer Aaron Siskind. Skinner has regularly sold work by this popular artist—in fact our highest selling photography lot was a suite of ten prints from Siskind’s Pleasures and Terrors of Levitation series that hammered at $35,000 in 2013! The selection in our upcoming fine art photographs auction is particularly exciting because it includes examples ranging from Siskind’s early documentary work to his final abstractions, and provides a window onto his artistic practice and motivation.

Siskind was born in 1903 in New York City. The son of Russian Jewish immigrants, he earned a bachelor’s degree in social science, and taught English in the public school system for over twenty years. His first loves were politics, music, and poetry, but he became interested in photography after receiving a camera as a honeymoon present. In 1932, Siskind became a member of the New York Photo League, which was committed to documentary photography as a vehicle for effecting social change. The group’s best-known photo essay was Harlem Document, a comprehensive cultural, economic, and social analysis of New York’s largest African-American neighborhood. One of my favorite images in the group is Siskind’s 1939 portrait of a sleeping man in his room, which is from the related series The Most Crowded Block (lot 162, estimate $1,500-2,500). The composition suggests that the images of (mostly white) celebrities pinned to the wall above him are the stuff of dreams compared to the very different socio-economic circumstances represented by his block in Harlem. 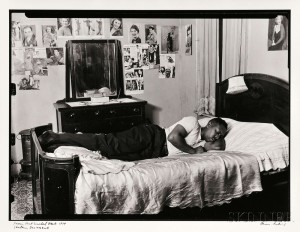 In the early 1940s, Siskind abandoned his documentary practice and began making more abstract, metaphorical images of found objects such as beach detritus, graffiti, and other visual fragments. While photography was clearly capable of recording information, he wanted to explore its capacity as a medium for expressing subjective thoughts and ideas. Gloucester 1H (lot 163, estimate $2,000-3,000), which captures a discarded glove on wood planks, is a pivotal work reflecting this shift. Both descriptive and abstract at the same time, this image demonstrates what Siskind described as combining the intuitive impulses rooted in surrealism with formal rigor characterized by its simple composition, dominance of dark tonalities, and emphasis on the rectangular frame and flat plane of the picture. For Siskind, subject matter had become less important than creating photographs that were “psychological in character.”

Siskind’s preoccupation with shape, line, and gesture drew comparisons with abstract expressionist painting. He knew many of the artists associated with the movement and was particularly friendly with Franz Kline who in the late 1950s paid homage to Siskind in a series of paintings named after him. Siskind returned the honor in a body of work made between 1972 and 1975. Comprised of six groups of images of walls taken in different places, including Boston, Rome, Jalapa, Mexico, and Lima, Peru, the series Homage to Franz Kline evokes the dynamic feel of Kline’s paintings as exemplified by Jalapa 47 (lot 167, $1,200-1,800). 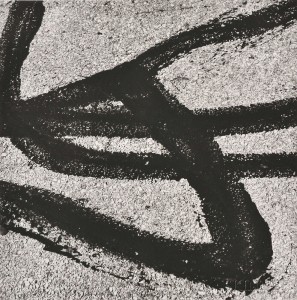 Siskind pursued abstract imagery for the remainder of his career. His final body of work captures the dark curvilinear shapes of road tar against weathered and textured asphalt. The story goes that he drove around with a companion to search for “poetic” tar to photograph. In 1989, he produced a portfolio of six photogravures from his Tar Abstracts series (lot 169, $5,000-7,000). While he also made gelatin silver prints of this subject, Siskind appreciated the rich and painterly quality of the photogravure technique, a process with visual qualities similar to aquatint etching. With their gestural marks, textural contrasts, and graphic power, Siskind’s road tar photographs are the fulfillment of his desire to use photography as a medium for personal expression.

Come learn more about Siskind’s work and see these beautiful photographs in person during our Gallery Walk and auction preview on Thursday, January 22, at 6 pm!