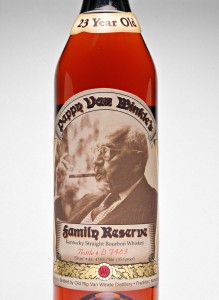 Pappy Van Winkle bourbon has popped up recently in articles extolling its desirability and scarcity. There is even a documentary film, Chasing Pappy, about one man’s quest for the elusive libation. Long considered one of the finest bourbons available, this beverage is complex, smooth and a bit sweeter than most others on the market thanks to the inclusion of wheat in the mash. The third-generation company crafts this bourbon from a family recipe developed by Julian “Pappy” Van Winkle. There is only one problem: they just can’t make enough.

The history of this Kentucky legend starts with Julian Van Winkle, Sr. taking a job with W.L. Weller & Sons, a liquor wholesaler, at the end of the 19th century. Van Winkle went on to purchase the company he worked for and later purchased a distillery that supplied the wholesaler with bourbon. Following the Great Experiment, the distillery re-opened in 1935 with 61-year-old Pappy at the helm. The so-called Stitzel-Weller distillery produced bourbons familiar to many, including Old Fitzgerald and Rebel Yell. Julian Van Winkle, Jr. took over operations in 1965 after the passing of his father. In 1972, under pressure from stockholders, he sold the distillery and all its brands with just one exception: Old Rip Van Winkle.

Originally released with stocks held from the old distillery, Old Rip Van Winkle has gone on to receive numerous awards and garnered high ratings across the board. In 1981, Julian Van Winkle III took over operations and was joined by his son, Preston, in 2001. The original still ceased production in 1991 and in 2002 the family entered into an arrangement with the Buffalo Trace Distillery to produce the bourbon according to the original family recipe – a sour mash bourbon consisting of corn, malted barley and wheat.

Now, if you’ve done the math, you’ll be able to tell that the 11 years between 1991 and 2002 (following the closure of the Stitzel-Weller distillery and prior to the Buffalo Trace era) mean that we’re looking at a bit of a drought when it comes to aged bourbon from the family. Thankfully, the Berheim distillery in Louisville has been producing wheated bourbon in some capacity since 1992 and in earnest since 1999. Currently, the company releases 10, 12, 15, 20 and 23 year bourbon under the Old Rip Van Winkle brand. These all consist of blends of wheated bourbon made to the specifications of the family and distilled at Stitzel-Weller, Buffalo Trace and/or Berheim distilleries.

The unusual mash bill, complex history and significant aging period mean that for the next several years Pappy will be hard to come by. It’s worth noting that there is no legal aging requirement for bourbon (production, of course — you still need to be 21 to enjoy consuming it). The only requirements are that the alcohol must be made from at least 51% corn mash, aged in new American charred oak barrels and must be at least 40% a.b.v. (80 proof), and if an age appears on the label, that age must be that of the youngest whiskey in the bottle.

Skinner is pleased to offer at least one bottle of each of whiskey in the current portfolio of the Old Rip Van Winkle Distillery, including the 13-year rye whiskey, in our Fine Wines – Online auction featuring Fine Spirits. Join us and bid online now through May 11, 2013 at 6PM EDT.