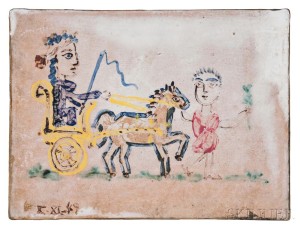 Pablo Picasso was a dynamic, creative force. He was intrigued by and experimented with countless media throughout the course of his long and illustrious career. Picasso’s Cubist oil paintings – some incorporating collage – of the 1910s changed the world of Western Art forever.  He worked in crayon, pencil, and pastel and was a prolific printmaker as well. He created sculptural works from a broad range of materials including bronze, glass, and wood.

Picasso first experimented with clay in 1905, when he modeled a small group of heads, some of which were later cast in bronze, but largely ignored the medium until later in life [1].  It was not until the age of 66 that Picasso turned his serious attentions to clay and ceramics. In 1946 Picasso went to the annual pottery exhibition in Vallauris, a town on the Côte d’Azur in southeastern France.  Here he met Suzanne and Georges Ramié, the owners of the Madoura Workshop. The Ramiés gave Picasso open access to the tools and materials of their workshop, and allowed Picasso to create ceramic works at will with the understanding that in return they would sell the pieces.

Mastering the techniques of decorating and firing clay is complex, and many of Picasso’s works for the first year were exercises and experiments in mastering the craft. Picasso did not turn the clay forms himself.  He began with standard forms of plates and bowls, but as he mastered glazing, engraving, and engobe, he began designing his own unique forms which were turned by local potters. He began by bending and stretching wet jars and jugs, creating new forms, some of which appeared animalistic or anthropomorphic. Many of his complex forms were composites of traditional turned forms of vases and bowls that were cut, manipulated, and joined together to create sculptural forms far removed from their utilitarian roots. 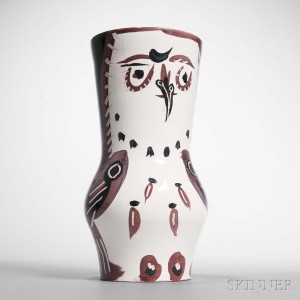 The breadth of Picasso’s designs in clay was as broad and inventive as in his other media, but there are trends to be seen.  Vallauris had been a center of pottery manufacture dating back to Roman times, and Picasso did not create in a vacuum. He had a vast knowledge of Classical art, and this extended into ancient Greek ceramics and even those of the Greek ancestors. His interest in the classical past is exemplified by Femme au char triomphal, 1949 (Lot 100).  The charioteer is a woman, her head wreathed in laurel, a symbol of victory.  Her horse is led by a servant in the same way that the emperor Titus was depicted returning victorious from wars in the east, on his great arch in the Roman Forum.

Picasso turned repeatedly to animal subjects, and particularly owls. Picasso purportedly adopted an injured owl in 1946 who he named Ubu. In the late 1940s and early 1950s Picasso returned to the owl as a subject, such as seen in his vase Maroon/Black Wood-owl, 1952 (Lot 103).  Picasso was certainly aware of the iconography of the owl as the symbol of Athena, Greek goddess of wisdom, and of night. Here his owl seems both noble creature and steely-eyed hunter.

Picasso loved his ceramic works. He displayed them liberally in his homes (Collecting tip: they look terrific displayed in small groupings, so don’t feel guilty bidding on multiple lots) and he kept an extensive collection of them throughout his life. Many of these passed on to his widow, Jacqueline Roque Picasso, including both of the unique tiles featured in the January 27th Fine Prints & Photographs auction:  Femme au char triomphal, 1949 (Lot 100) and  Le joueur de diole, 1957 (Lot 101). 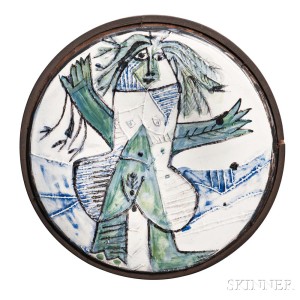 One of Picasso’s favorite subjects was women.  Many of his female subjects such as Dishevelled Woman, 1963 (Lot 109) were non-portraitive. Other were very much portraits. Jacqueline, like many of Picasso’s lovers, was the subject of his art repeatedly, including Jacqueline’s Profile, 1956 (Lot 107). Picasso and Jacqueline met while his mistress Françoise – she was also the mother of his children, Claude and Paloma – was traveling in 1953.  Jacqueline and Picasso lived together before Picasso’s first wife – Olga – died in 1955, and eventually the two married in 1961.

Picasso’s art and love life are equally intriguing and deeply intertwined. While it is hardly our place to put his private life on display, we are more than happy to do so with his ceramics. We hope you’ll be able to join us to preview these and other works in our Boston gallery, on Wednesday, January 25 from 12-5PM, Thursday, January 26 from 12-8PM, and Friday, January 27 (day of sale) from 9-10AM.