Chinese monochrome-glazed ceramics have been attracting western collectors since the 18th century. The collecting frenzy was ignited by the French and soon followed by the Americans of the Gilded Age. For the immensely varied hues spanning the whole color spectrum from white to black, monochrome ceramics were collected and used as a vibrant design element to decorate their chateaux, mansions, and hotels. Many terms have been coined to indicate the Chinese glazes, such as ‘ding ware’ for the creamy white; ‘blanc-de-Chine’ for the ivory white; ‘celadon’ for the grayish-green; ‘sang-de-boeuf’ for the deep red; ‘peachbloom’ for the soft pastel pink; ‘clair-de-lune’ for the delicate pale blue; and ‘Imperial yellow’ for the egg-yolk yellow; to list a few.

All these ceramic colors are very much related to China’s traditional color symbolism, based on the Five Elements Theory and its complex associations, ranging from directions to planets, heavenly creatures, climates, fruits, and grains. No ceramic piece of Imperial quality was made, decorated, and used without considering the symbolic meanings. For example, the yellow implies the earth and thus was used to decorate the Temples of the Earth, often with the associated dragon design. The yellow and white were preferred for rituals at the Qing court, and the Empress Dowager Cixi (1835-1908) is known for her strict use of ceramic colors to decorate her palaces and court events, going as far to specify the color and number of pieces to be displayed. 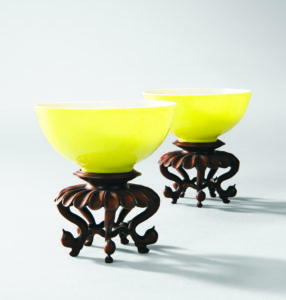 In today’s auction parlance, monochrome ceramics describe the white-glazed porcelains additionally coated with a single-colored glaze. Production of these wares began in Jingdezhen for Imperial use during the late Ming period and became increasingly more popular throughout the Qing dynasty. Most of the Jingdezhen monochrome porcelain pieces are plain without any prominent design or decoration (with a few exceptions), focusing on color and shape.  Highly prized are yellow glazes as the color is more difficult to achieve and thus rarer. Also popular among collectors are peachbloom and clair-de-lune glazes. Only a limited number of shapes were formed and are exemplified by the amphora bottle vases and beehive water pots of Kangxi, Yongzheng, and Qianlong periods.

However, due to the myriad hues and shades achieved through technologies developed over a long period, monochrome ceramics can be difficult to date or classify. A method is available to help complement the authentication process is to examine the bubble structure beneath the glaze. However, even the microscopic method could be misleading because it is known now that the specific structure of ceramic bubbles can be created in modern gas kilns by controlling the fluctuation of kiln temperatures. Nevertheless, if combined with other authentication criteria, such as shape, color, clay, and wear, bubbles in glazes can serve as a critical dating method.