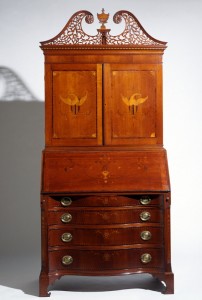 The Making of an Exhibit

The old proverb of “it takes a village to raise a child,” could easily be changed to: “it takes a Village to put on an exhibit.” On October 19, 2013, the exhibit Delightfully Designed: The Furniture and Life of Nathan Lombard will open at Old Sturbridge Village (OSV).

This has been an ambitious project for us. Many new historical discoveries have come out of a year’s worth of curatorial research, providing new insights into the furniture, family, and business of 19th century cabinetmaker Nathan Lombard. Colleagues across the Village—from the costume shop, to our interpretive staff, to bookbinders, and woodworkers—have all collaborated on ways that we can bring the Lombard story beyond the exhibit gallery, to find expression in every aspect of our 1830s living history museum.

Lombard’s extraordinary gift was his masterful use of decorative inlay. He incorporated twisting, swirling vines — blooming with flowers, and cascading down desk fronts and table tops. In other designs, geometric patterns add sophistication to his compositions, while in still others, eagles with outstretched wings serve as a reminder of the New Republic.. Yet, there is so much more to Nathan Lombard than beautiful inlay. His story is as much about family and community as it is about craftsmanship.

A Homecoming for Lombard’s Work 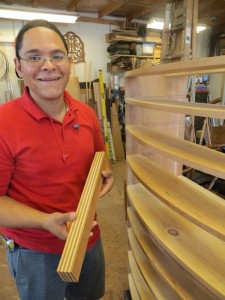 Over the course of the past year, we’ve also come to realize that Nathan Lombard’s narrative is an important one for OSV to tell. In fact, we take great pride in this story. Raised in Brimfield, Nathan was a native son of the Sturbridge area. He would later marry here in 1802 and settle in nearby Sutton in 1805. One of the cabinetmakers who worked with Lombard, Ebenezer Howard, lived in a house on what is now the OSV campus.

The exhibit includes fifteen pieces of furniture linked to Nathan Lombard and scores of other historical documents and artifacts. Some furniture pieces have been loaned to Sturbridge from other institutions, such as Winterthur, Historic Deerfield, and Phillips Academy. Others come from private collections and are rarely on view. This exhibit is a homecoming, of sorts, for all of Lombard’s furniture and represents the largest reunion of Lombard’s pieces since they left his workshop in the early 1800s. 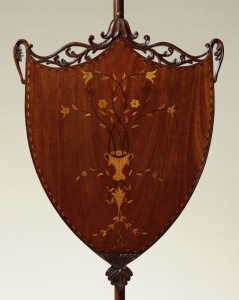 To involve visitors in Lombard’s story, many regional craftsmen and women have been hard at work recreating key items in the exhibit.

Freddy Roman, a woodworker and New England chapter leader of the Society of American Period Furniture Makers,  is reproducing OSV’s newly acquired Lombard chest of drawers and drop-leaf table so that we may have reproductions for use out in the Village. Artisans from the North Bennet Street School created hands-on interactive furniture pieces for the exhibit, and they will also conduct demonstrations on selected days to show visitors how Lombard created his masterpieces.

Several family artifacts will also be included in the exhibit, including an elaborate firescreen originally owned by Ezra Allen, a cousin of Nathan’s wife, Delight Allen Lombard, and a fabulous dress owned by Ezra’s daughter, Mary C. Allen. In a joint effort between staff and volunteers of the curatorial, interpretation, and the costume departments, we set out to recreate this garment.  This included over 300 hours of painstaking study of the construction, details, and pattern making. One of our interpreters will wear the dress around the Village so that visitors can engage in this story. Another copy of the dress will be sewn by hand out in the Village, presenting an opportunity for visitors to discuss the Lombard exhibit and women’s crafts. 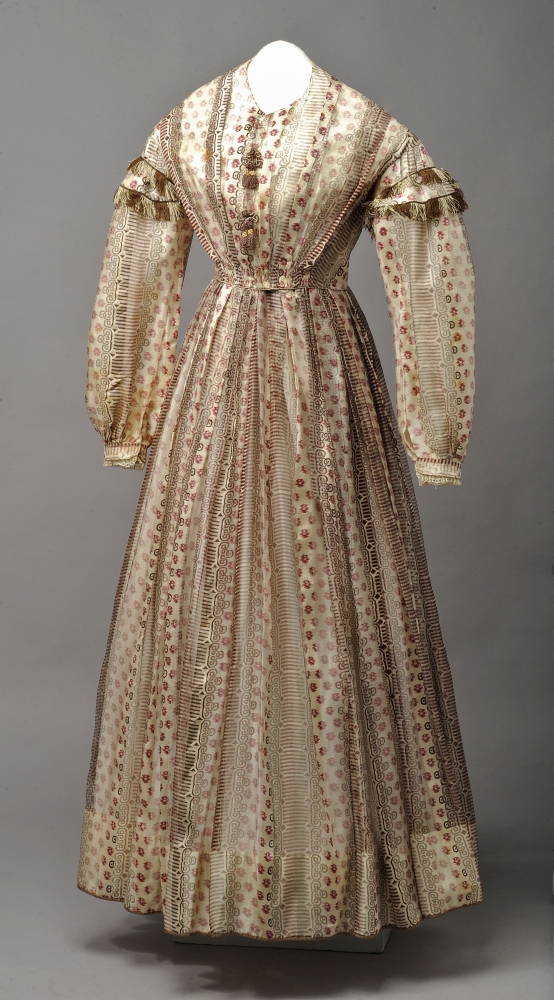 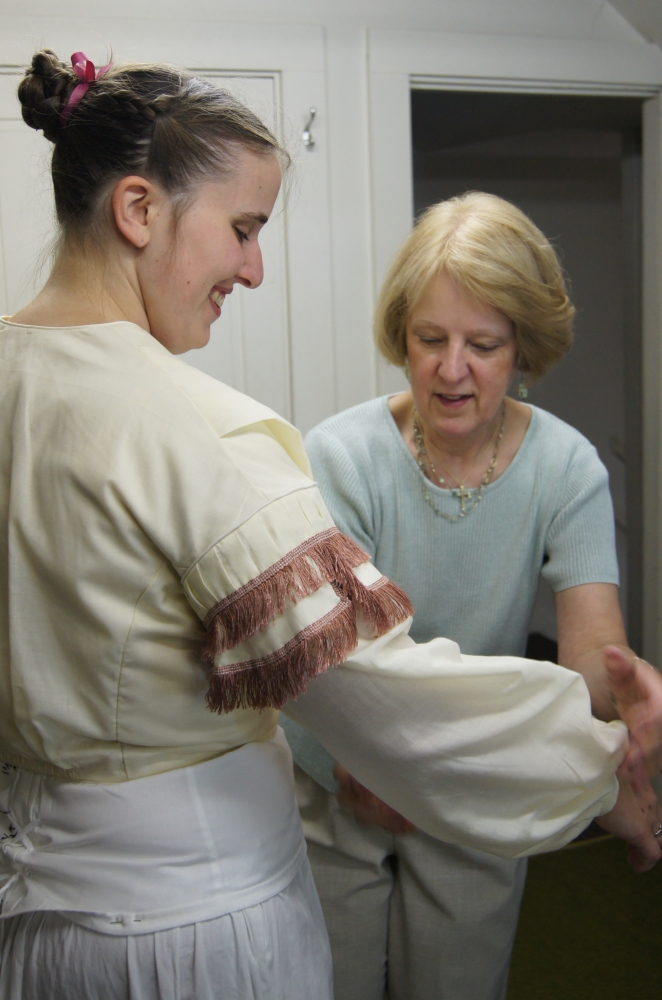 In addition, our OSV bookbinder will recreate the 1826 friendship album of Brimfield resident Harriot Janes. This artifact connects to the Lombard story in that it is filled with poems and notes penned by many of Lombard’s nieces and cousins, including Mary Allen.

The involvement of these modern-day craftsmen and women reminds us that Massachusetts’s strong history of furniture and other fine crafts continues to be is alive and well today as we celebrate Four Centuries of Massachusetts Furniture.

Join Us and Explore the Exhibit

When I look back at this endeavor, I am overwhelmed by the efforts that so many colleagues and OSV friends have put forth on behalf of this project. This project, just like Nathan Lombard’s own story, is about so much more than furniture. It is about people, it is about relationships, and it is about sharing a story. We hope that you come and enjoy the exhibit. Join us beginning October 19, 2013 at Old Sturbridge Village.