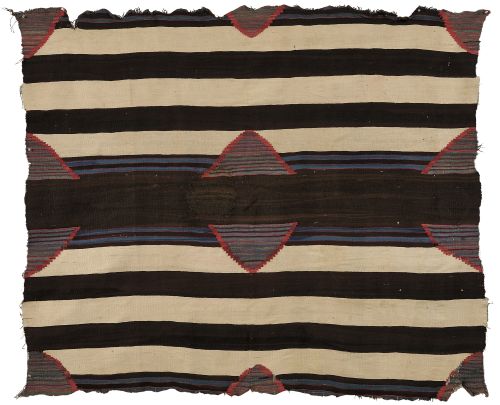 Sometime between 1908 and 1910, a woman named Minnie Clay Wuerpel took a Fred Harvey train trip west with her husband, painter Edmund Wuerpel. A certain Navajo weaving caught her eye, and she paid $65 to take it home with her. An accomplished weaver herself, she added the textile to her collection, and may even have been the one to repair a large hole in the center.

I realized the minute I first saw the weaving, with the variegated wool, the browns, all this great character, that this had to be a really early third phase Chief’s blanket. The consignors weren’t aware of the potential value of this weaving. I told them, “Don’t worry, you’ll be happy.” When they saw the price realized online, they told me they had to look it up five or six times. They didn’t believe it.

I wasn’t so surprised. Weavings like this one rarely come on the market, and when they do, they’re still highly coveted. Even though this one is a wreck condition wise, with that big repair in the middle and the edge damage, it achieved a remarkable price for a third phase Chief’s blanket.

First phase Chief’s blankets are the earliest. The Navajo started making them in the early 19th century for trade with the Ute Indians, among others. Those first phase blankets can go for half a million. The design is simple: striped, horizontal weaving with a big, brown band in the middle. People sometimes think of them as minimal art objects. In the second phase, rectangular shapes got added to the design. A great second phase will bring $200,000-300,000. 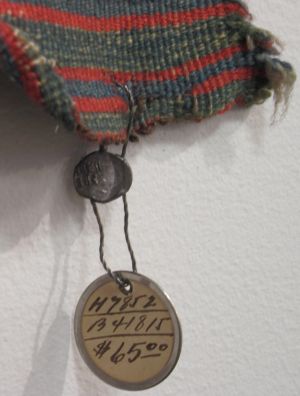 The third phase introduced triangles instead of rectangles, and this blanket is one of the earliest third phases to ever come on the market. It was probably done before the Navajo were incarcerated in 1868 at Bosque Redondo. After being in this awful place, their lives really changed. They weren’t warring with the whites anymore, and a lot of dyes and different wools became available, so the weaving changed, too.

It’s rare to find a weaving from before that period, when the Navajo were living off reservations like they’d always lived. They made these Chief’s blankets on big outdoor looms, using natural wool with indigo and cochineal dyes. This one had a little bit of synthetic red, but I think that was introduced when the repair was done. The original was most likely all natural dyes, which means it probably dates from the early 1860s.

There hasn’t been a blanket like this on the market for several years, and I had at least a dozen serious bidders. This all goes to prove that classic Navajo weavings are still in high demand. This is what big collectors and museums want. Minnie Clay Wuerpel made a great decision back in the 1900s!