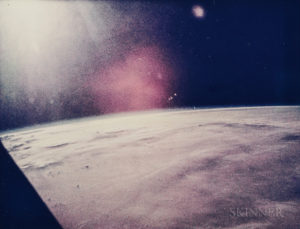 The Beauty of Space is the first auction in the United States to focus solely on vintage photographs produced from 1961 to 1972 by the National Aeronautics and Space Administration. The 446 lot single-owner collection showcases both iconic and rare gelatin silver and chromogenic prints presenting an extraordinary and comprehensive photographic journey to the Moon and back as seen through the eyes of the Mercury, Gemini, and Apollo astronauts.

Images of the Moon have been made since the early years of photography’s invention in 1839. English scientist, chemist, and historian John William Draper made the first detailed photograph of the full Moon in 1840, and in 1849 American editor, publisher, and photographer Samuel Dwight Humphrey produced two daguerreotypes, each plate revealing nine distinct impressions of the Moon taken at different exposures. These early images mark the beginning of celestial and astronomical photography.

More than 100 years later, on February 20, 1962, John Glenn became the first human to photograph the Earth from space as he orbited the planet on board his Mercury spacecraft Friendship 7. Every astronaut from then on would carry a camera into space. 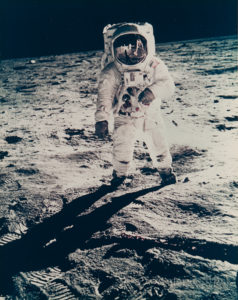 Portrait of Buzz Aldrin with the photographer and the Lunar Module reflected in his gold-plated visor, Apollo 11, July 1969 (Estimate $1,200-1,800)

NASA was at the forefront of photographic technology, and its Photographic Division was founded in close partnership with Kodak, Hasselblad, and Zeiss. Cameras and film were adapted for use in the harsh conditions of space and processed in the most advanced photographic laboratory available at the time. After each mission, NASA selected a limited number of the astronauts’ photographs for release to the public. The rest were accessible only to accredited researchers in the archives of the Manned Spacecraft Center, Houston, from which most of this collection is sourced. Many of the images remained unknown to the general public until they began to be archived online in the early 2000s. 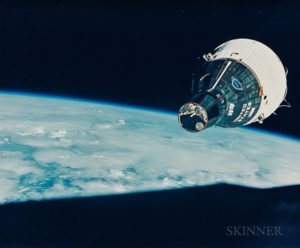 All the photographs in the auction are vintage prints, meaning that they were made at or around the time the negatives were taken. For this reason, they are more highly valued than a contemporary reprint. It is not possible to know how many prints were made from a negative. Some of the more iconic images like the footprint on the moon which were more in demand were likely printed in larger numbers. The majority, however, are extremely rare, and it is possible that only a few prints were produced to satisfy a request from a scientist, for example. The large-format prints and panoramas are especially unusual.

Acquired from the collections of former NASA scientists and employees, as well as other collectors of the material, the photographs on offer were brought together over two decades by a private collector of 20th-century avant-garde art. His fascination for explorers and adventurers through the prophetic novels of Jules Verne led him to the pioneering astronauts who voyaged to Space.

In today’s digital era, it is often difficult to remember that the golden age of space exploration and its extraordinary technical achievements corresponded to a time when photography was still analog, requiring light-sensitive chemistry, film, and photographic papers. For example, the panoramic mosaics in the auction had to be printed and then hand-assembled to form the final, unique image. Produced for study by scientists and for release to the news media, the majority of the photographs were working documents that over time were lost, damaged, or forgotten. Now, over five decades later, the growing interest in vernacular photographs like the NASA photographs, which weren’t made specifically for the purposes of artistic expression, demonstrates that the definition of “art” remains fluid. As such, the works on offer appeal to space enthusiasts, as well as photography collectors, providing an exciting opportunity to acquire original photographic artifacts taken by the pioneers of space and lunar exploration.

2 thoughts on “NASA Photographs and the Meaning of Vintage”