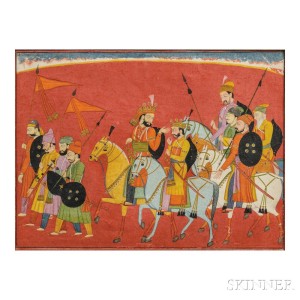 An exquisite collection of Indian Art is being offered in the May 16th Asian Works of Art auction. The carefully selected pieces in this collection are not only visually stunning, but give a glimpse into the breadth and depth of Indian spirituality and mythology. The collection of Dr. Arthur L. Funk, former University of Florida History Professor, encapsulates the diverse beauty of Indian art and includes, Indian bronzes, carved wood architectural elements, and traditional and modern Indian paintings.  The collection was compiled primarily while Dr. Funk and his first wife Genevieve resided in India in the 1960s.

The pinnacle of the collection, an 18th century Garhwal painting of Sisupala and his retinue is an iconic image and was published in Indian Mythology by Veronica Ions, 1967 (Lot 11). The painting depicts an episode mentioned in the Bhagavata Purana detailing the life of Krishna, the incarnation of the Hindu god Vishnu. Sisupala, Krishna’s cousin, is depicted riding with his attendants to meet his prospective wife, Rukmini. Despite being cousins, Sisupala acted as Krishna’s sworn enemy after Krishna eloped with Rukmini. Krishna had promised Sisupala’s mother, his aunt that he would forgive Sisupala one hundred insults, but once Sisupala had committed his one hundred and first, Krishna swiftly killed Sisupala. 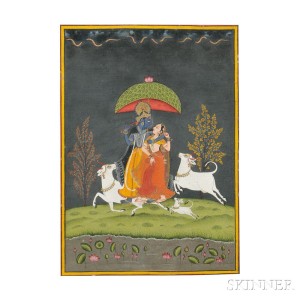 Another painting illustrates Krishna in a charming scene with his companion Radha, sheltering beneath a lotus umbrella from a darkening storm (Lot 10). In the Hindu faith and mythology, Radha was a gopi, one of a group of female cow-herds who were devoted to worshipping and serving Krishna. Radha was Krishna’s favorite Gopi, and she is depicted with Krishna in many artistic forms as the epitome of both pure and romantic love.

The life of the former owner of the collection, Dr. Arthur Funk, is an interesting story in its own right. Arthur Layton Funk, born in Brooklyn, NY in 1914, served in World War II as a Naval officer on the American destroyer U.S.S. Farquhar. When Dr. Funk returned from the war he began working at the University of Florida as a history professor, but then later left to travel extensively while working for the U.S Information Service. He was stationed in India, Syria, Lebanon, and Madagascar. Dr. Funk returned to the University of Florida in 1962, but still continued to travel and indulge his passion for the arts. 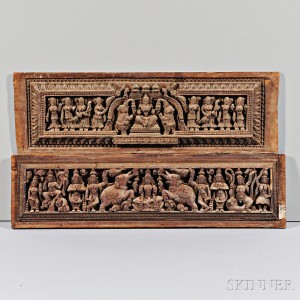 Later in his life, Dr. Funk exhibited twenty examples from the collection of South Indian wood carvings at the gallery at the University of Florida. Many of the carvings incorporate imagery of Lakshmi, the Hindu goddess of fortune, prosperity, beauty and love. Lakshmi is the feminine counterpart to Vishnu, and both Radha and Rukmini are incarnations of Lakshmi. One set of wood lintel friezes are carved to depict Lakshmi seated on a lotus throne (Lot 61). The elephants on either side of Lakshmi are pouring water on her with their trunks, a gesture symbolizing the continuous attainment of purity and strengthening of the spirit.