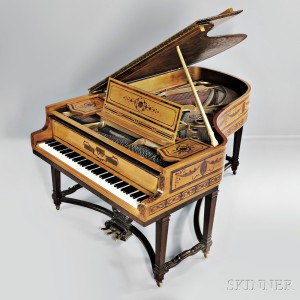 On July 15th, Skinner will offer an elegant late 19th century Steinway Marquetry Model B piano as Lot 512 in their European Furniture & Decorative Arts auction. The history of the origins of Steinway & Sons is now legendary. The kitchen of Heinrich Engelhard Steinweg’s home in Seesen, Harz, Germany, served as laboratory and workshop for the first handcrafted piano under his name, which debuted in 1836. Fourteen years and well over four-hundred “Steinweg” pianos later, the Steinweg family immigrated to America. They changed their name to Steinway, Heinrich became “Henry,” and he opened a shop called “Steinway & Sons” in Manhattan in 1853. With this venture, Steinway sought not just to develop of standard among its competition, but they desired to set the “gold standard,” for which they are known for today. Classical pianist, radio host, author, and artist David Dubal once wrote, “Steinway is the piano which all others aspire to be! Without the Steinway our glorious literature would be in jeopardy.” From Sergei Rachmaninoff to Vladimir Horowitz, Judy Collins to Billy Joel, Steinway has always been the piano of choice for many.

By 1857, the Steinway’s Art Case line was founded, when a highly stylized piano with an elaborate case and legs was made, just as the piano was gaining popularity among the middle and upper classes, and the demand for not only a superbly-crafted instrument but a decorative one, too, was soon apparent. These Art Case pianos were manufactured as special one-of-a-kind instruments and would soon attract many industrialists, politicians and patrons who sought the finest from Steinway. Some of the most outstanding examples of these special pianos can now be found in the Metropolitan Museum of Art (designed by George Shastey, originally owned by W. A. Clark,) The Sterling & Francine Clark Art Institute (action by Steinway, decorated with paintings by Alma-Tadema, originally owned by Henry Marquand,) and the Smithsonian’s National Museum of American History (on long term loan to the SAAM) that was a gift from Steinway & Sons to the White House in 1903, and decorated with a painted lid by Thomas Wilmer Dewing. The Dewing piano was in the White House until 1937 when Steinway presented another Art Case piano to the White House.

Skinner is proud to present a splendid Steinway from the Estate of Paul Lauer as part of their European Furniture & Decorative Arts auction on July 15th, crafted in the Art Case tradition. Lot 512 has a case beribboned with a confection of decorative motifs designed by Cottier & Co., including marquetry swags and garlands, an inscribed polychrome-painted poem, and an interior lid decorated with an elaborate tonalist-style scene of figures in a forest glade adjacent to an unusual ray-eye motif. The piano, a model B bearing serial number 69430, has been dated to have been completed on October 21, 1890, and delivered to Cottier & Company of New York on November 29, 1890.

Scottish-born Daniel Cottier, whose design firm’s name is inscribed with “Steinway & Sons” above the keyboard of lot 512, was probably honoring a specific commission and set of design iconography in decorating this elaborate and elegant piece. The piano would have been as much statement and showpiece as an item of aural spectacle. Cottier was a key figure in the Aesthetic Movement, known best for his stained glass artistry, but he was also a decorator, furniture maker and designer. He collaborated on projects with John LaFarge for Boston’s Trinity Church stained glass windows, and with others such friend and associate William Leiper for private homes and churches from Scotland to Montreal, Australia to New York. His design aesthetic was likely established by his being tutored by one of the great Pre-Raphaelite artists, Ford Madox Brown, while at Working Men’s College in London, and at the same time (early 1860s) Cottier witnessed the inauguration of the design firm established by William Morris. Cottier and Leiper’s friends and associates included a wide spectrum of artists and taste-makers from Vincent van Gogh, Tiffany to Vanderbilt, and artist Albert Pinkham Ryder. Making art was not just a way of life, but by the end of Cottier’s brief life in 1891, his firm had also developed an art-dealing business, which continued into the 20th century.

Whether you prefer “Rach 3” or “Piano Man,” Skinner’s Marquetry Model B piano is sure to inspire you with Cottier & Company’s case and Steinway’s sound.