Which Modernist Necklace is Your Favorite? 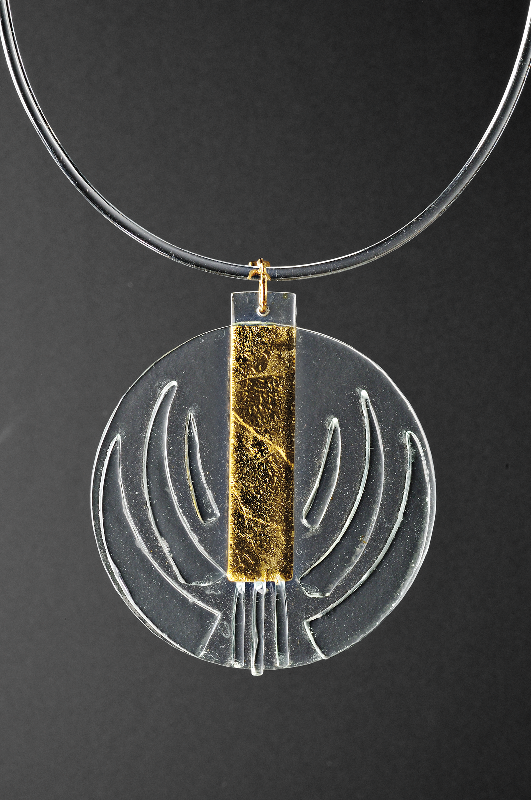 Each glass pendant hangs suspended, reflecting light with its own unique glints of silver and gold. This is the Solar-Lunar Cosmos series of modernist necklaces, created by Margret Craver, a pioneer in the American Studio Jewelry movement. On June 14, 2011, Skinner will bring Margret Craver’s work to auction for the first time. Her fabulous handmade jewelry pieces range from expert silverwork to notoriously difficult en resille enameling, and her work is featured in numerous museum collections. The Solar-Lunar series from the 1970s is an example of an experiment in glasswork.

The transparent glass pendants are set with either gold to symbolize the sun, or silver representing the moon. The glass shapes seem geometric from a distance: a balance of circles, rectangles, and triangles. Close up, however, you can see that the shapes are slightly irregular, lending an organic, natural feel to the pieces. Each one hangs from a rigid, clear acrylic torque, allowing the pendant to float uninterrupted, and creating an interaction between the wearer and viewer. As the wearer moves, light glints from the pendant in changing patterns.

Margret Craver created 12 pendants in the Solar-Lunar series, and only one was ever sold. The other eleven will be offered in the June 14 Fine Jewelry Auction at Skinner, each piece estimated at $600-800. (Note: each piece sold for over $1,000).

Which pendant is your favorite? I couldn’t decide between Lot 445 and Lot 447. The first is a graceful circle, and I love how it hangs suspended. The second is more unusual and has a very interesting shape with delicate details.

To learn more about modernist jewelry by Margret Craver, join us for a talk by Jeannine Falino, curator at the Museum of Arts and Design on June 8, 2011 at 6:30 p.m. at Skinner’s Boston Auction Gallery.

9 thoughts on “The Solar-Lunar Series: Handmade Pendants by Margret Craver”