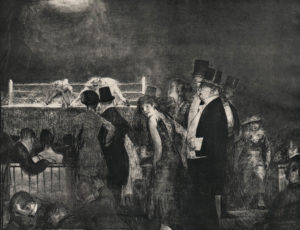 One of the youngest of the Ashcan School artists, George Wesley Bellows began making prints in 1916. Like his paintings, his lithographs incorporated a wide breadth of subject matter, depicted in realistic, often gritty, detail that signified American city life in the early 20th century in all of its vast varieties. Skinner is lucky enough to have eight works in the January 2018 Fine Prints & Multiples auction, spanning his career and interests.

Bellow’s earliest prints were nudes – both male and female – and he returned to the nude in the form of figure studies, bathers and the like throughout his career. Morning, Nude on Bed, Second Stone of 1921 (lot 16) is focused on the female form but is also a complex play of light and shadow. Sixteen East Gay Street of 1923-24 (lot 20) evokes Bellow’s childhood in Columbus, Ohio. Though not the address at which he grew up, the bustle of activity looks back cheerfully on earlier more innocent days, where children play on the sidewalks as friends gather on stoops and front porches to gossip and discuss the goings-on of the day. The sense of nostalgia is palpable.

Bellows was an athletic and energetic man. In his native Columbus, he was known first and foremost as a baseball player but gave up the opportunity to play ball professionally to paint. He depicted numerous sports scenes throughout his career and repeatedly returned to boxing subjects. These are amongst his most desirable prints. Three are included in the collection. Preliminaries of 1916 (lot 13), is one of his earliest boxing lithographs and is the only one to include women. It is also one of the few that takes the focus off of the boxers and turns it onto the audience. The central figure is elegantly attired in a long gown and stares out directly at us. Her companions – both male and female – are well-heeled, and the setting is Madison Square Garden in New York.

Between Rounds, Large, First Stone, also of 1916 (lot 14), is more typical in that it refers to a specific, identifiable bout. Here the exhausted boxer, Jimmy Nolan, collapses onto his stool and into the ropes, oblivious of all that goes on around him. His trainers hustle to cool and hydrate him between rounds while his manager whispers strategy into his ear. In the background Tornado Black rests in relative comfort. The composition depicts a rematch between the two fighters. In their previous bout, Jimmy lost his title to Black, and shortly after that his wife.

The White Hope (lot 18), published in 1921, shows a bout from 11 years prior. The combatants are the first African-American heavyweight champ, Jack Johnson, who watches as Jim Jeffries, the so-called “white hope,” slumps to the mat. Heavyweight champ Jeffries had retired undefeated in 1905 but came out of retirement to take on Johnson, the then reigning champ. Johnson defeated Jeffries to defend his title in 1910 in a fifteen round fight held in Reno.

The World War seems to have affected Bellows deeply. The family had routinely spent at least part of their summers on the islands off of Maine’s coast, but due in part to fears of German submarines, they stayed in Ogunquit in 1915. The prints made during World War I were often gut-wrenching, but afterward, Bellows returned to his images of daily life.

Boxing was not his only sporting subject. Tennis (lot 15) depicts a doubles match of lawn tennis at The Newport Casino, and focus more upon the sumptuous spectators than the match. Bellows and his family spent several summers in Rhode Island. This is one of the earliest works printed by Bolton Brown, marking the beginning of a long and fruitful collaboration between the two. Legs of the Sea (lot 17) of 1921 is also from the Bellows family summers in Rhode Island; the location is Third Beach in Newport. 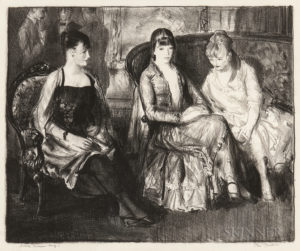 Elsie, Emma, and Marjorie, Second Stone (lot 19) of 1921 allows us a glimpse into Bellow’s more personal world. The sitters are, from left to right, Elsie Speicher, Emma Bellows, and Marjorie Henri. Bellows regularly socialized with fellow artists including Eugene Speicher and Robert Henri, thereby bringing their wives together. The ladies are poses on a chair and sofa, both of which appear regularly in Bellows’ compositions. The three artists are seen in the shadowed background, Bellows with his back to us, Speicher in the middle looking toward us, and Henri in profile to the left.

Bellows’ studio was located on the upper level of the family home on East 19th Street. Several factors seem to have influenced Bellows to start printmaking in the first place. One of the primary considerations was Emma and their two children. The sale of his lithographs provided a steady income to augment that of his painting and illustrative commissions. He also quickly discovered that the thin, fleeting light of his New York studio during the winter months made painting there difficult, but was more functional for lithography. These factors can be seen in his work, as images of family life become more prevalent in his compositions of the early 1920s. Though certainly not gritty, they maintain a certain level of emotional reserve very much in keeping with all of his depictions of early 20th century American life.