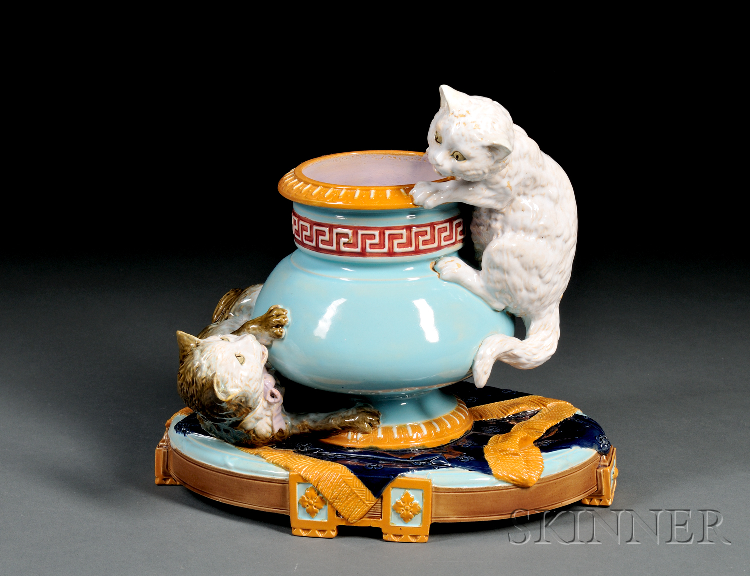 Victorian majolica was produced in Britain by at least twenty-five to thirty manufacturers, including major potteries such as Wedgwood and George Jones, from the 1850s right through until the turn of the twentieth century. The French, Germans and Americans also manufactured their own majolica, with little similarities in style and enameling to their British counterparts.

None has captured our interest as much as those examples of majolica produced at Minton.  With their vibrant combination of lively enamels and crisp modeling, they produced fanciful forms such as garden seats, heavily molded jugs, oyster plates, game pie dishes, covered cheese dishes, allegorical figures, umbrella/stick stands, pedestals, tiles, flower pots of all shapes and sizes, animals, tea sets, strawberry servers, ornamental vases and much, much more. Majolica decorates a variety of forms so beautifully that it is most impressive and a bit eye-popping to see a collection in a home or on display.

You’ll have a chance to see such a collection in the July 14, 2012 sale of European Furniture & Decorative Arts featuring Fine Ceramics at Skinner in Boston. We have a major collection of over one hundred fine examples of majolica. Works of Minton will be featured, and the collection will include examples from some of Minton’s contemporary British and French competitors.  A fine selection of Portuguese Palissy-type wares will also be offered.