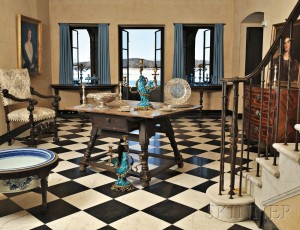 Designed and furnished in the Mediterranean Revival Style, Quattro Venti is the last great private residence in Annisquam Village, a small fishing hamlet near Gloucester, Massachusetts. Quincy Bent, vice president in charge of production at Bethlehem Steel at the turn of the last century, built the summer retreat around 1912.  His forebears purchased quarries in West Gloucester in 1820 and originally used the property, situated on the tip of the Annisquam peninsula, to transfer stone from river barges to schooners for delivery to cities up and down the East Coast.

Quincy’s wife, Deborah Norris Bent, oversaw the design and construction of the house and decorated the interior.  She spent many summers in Europe with her mother, Deborah Norris Brock, and these travels undoubtedly influenced her aesthetic.  While the house was under construction, mother and daughter purchased most of the furnishings in Italy.  Family lore has it that they were shipped directly to Gloucester along with building materials such as marble and roofing tiles. 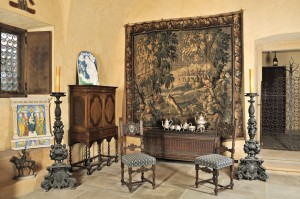 Mediterranean Revival, popular in the early 20th century with Grand Tour alumnae, combined elements of Gothic, Renaissance, and Baroque furniture and decorative arts from Northern Europe, the Iberian Peninsula, Italy, and the Spanish colonies.  The décor from Quattro Venti, which translates from the Italian as “four winds,” epitomizes this eclectic style with its juxtaposition of verdure tapestries, heavy dark furniture, bright ceramics, and wrought iron accents.  The home’s sterling silver, including an extensive dining suite, illustrates the lavish lifestyle the Bent family maintained at Quattro Venti.

Items from the family’s collection will be offered on July 12th, 2013 in Session I of the European Furniture & Decorative Arts auction in Boston. We hope you will join us for the sale.

2 thoughts on “The Mediterranean Revival Style of Quattro Venti”